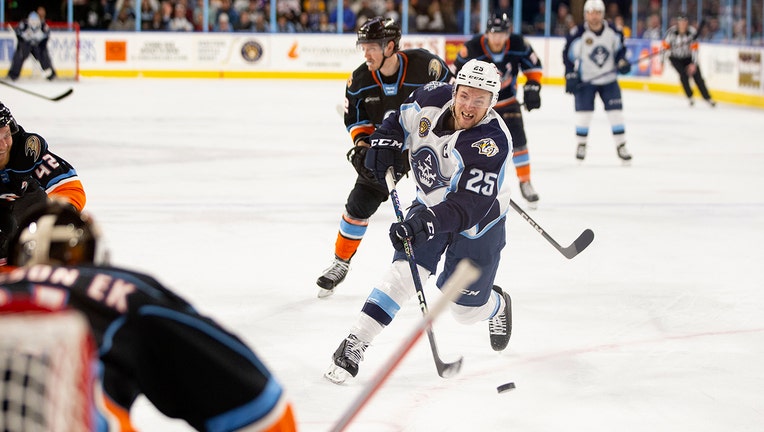 MILWAUKEE - One night after suffering their worst loss of the season, the Milwaukee Admirals returned with a vengeance – scoring four goals in the second period on their way to a 5-1 win over the San Diego Gulls Saturday night.

The Admirals had five players tally multi-point games led by Kevin Gravel, Jordan Gross and captain Cole Schneider who all registered a goal and an assist. Luke Evangelista and Jimmy Huntington both chipped in a pair of helpers on a night that saw 10 different players find their way onto the scoresheet.

Devin Cooley wasn’t tested much, but came up big for the Admirals when it was needed as he stopped 14 shots to earn his second consecutive win.

For the second night in a row, the Admirals dominated the first period, outshooting the Gulls 19-5. Unlike Friday night, it was the Admirals who got on the board first as Kevin Gravel scored his first with the Admirals when he finished off a 2-on-1 with Luke Evangelista 11:59 into the contest.

The Admirals busted things open in the second period, scoring four times including three in a 2:27 time frame in the middle of the period. Jordan Gross got things started at the 5:57 mark of the second as he fired a one-timer off a cross-ice pass from Kiefer Sherwood for his third of the season.

Phil Tomasino and captain Cole Schneider scored the next two just 37 seconds apart to push the Admirals' advantage to 4-0 and chase Lukas Dostal from the San Diego goal one night after he stopped all 40 of Milwaukee’s shots.

Markus Nurmi finished off the scoring for the Admirals during the second on his ninth of the season with 4:20 to go in the frame. Schneider picked up the primary helper on the goal, making him just the 117th player in the 87-year history of the AHL to collected 300 career assists.

Glenn Gawdin ended Cooley’s shutout hopes when he picked up his ninth of the year at 17:46 of the second, but that was as close as the Gulls would get as the Admirals cruised to the win.

The Admirals head out on a four-game road trip beginning Tuesday night for their first ever match-up against the Tucson Roadrunners.