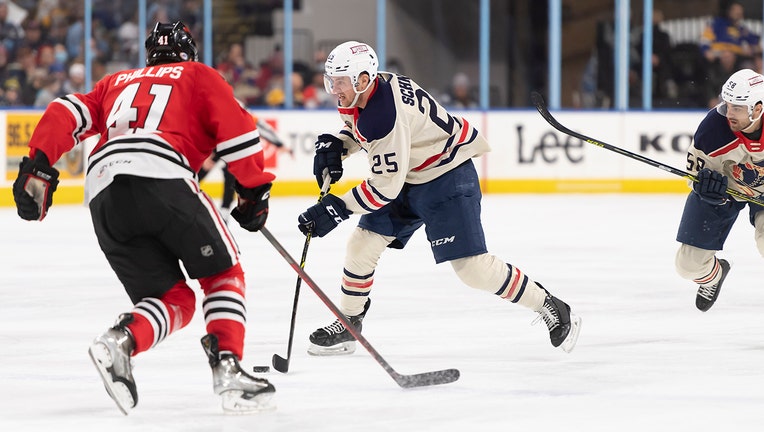 MILWAUKEE - Egor Afanasyev and Anthony Richard scored goals for the Milwaukee Admirals, but it wasn’t enough as Rockford’s Brandon Pirri scored a hat trick to pace the IceHogs to a 6-2 win over the Admirals on Saturday night at UW-Milwaukee Panther Arena.

Things didn’t start well for the Admirals as the IceHogs scored on their first two shots, both off the stick of the newly re-signed Pirri. The first was just 35 seconds into the game, and the second came at the 3:02 mark.

Milwaukee would cut that lead in half courtesy of Afanasyev’s fourth power-play goal of the season just over eight minutes into the second period. With the Admirals on the man-advantage, David Farrance faked a shot from the blueline and passed to Afanasyev, who sent a snapper over the left shoulder of IceHogs goalie Colin Delia.

However, Rockford would get two more before the period was out, beginning with Adnrei Altybarmakian’s second of the season at 12:44, followed by a power-play score from Wyatt Kalynuk with 3:32 remaining in the sandwich stanza.

Richard picked up his second goal in as many games to cut the lead to 4-2 early in the third period. After a shot from Jeremy Davies pinballed around the crease, Richard pounced on an errant IceHogs pass, turned and fired over Delia’s glove at 4:53 of the third.

Any hopes of a comeback for the Admirals were snuffed out when the IceHogs' Lukas Reichel scored from the left dot at 9:58 of the third. Pirri would pick up the hatty with an empty-net goal late in the third to seal things.

The Admirals look to rebound as they wrap up a three-game homestand when they host the Manitoba Moose next Wednesday, Jan. 12 at 7 p.m.

The Wisconsin DNR is hosting Free Fishing Weekend Jan. 15-16. No fishing license or trout and salmon stamps are required.

Tucked just off Highway 14 on the way from Richland Center to Readstown, the village of Boaz has a church, a bar and a supper club.

The Wisconsin DNR asks all riders to be in the know and review Wisconsin’s snowmobile safety rules and regulations before heading out this winter.