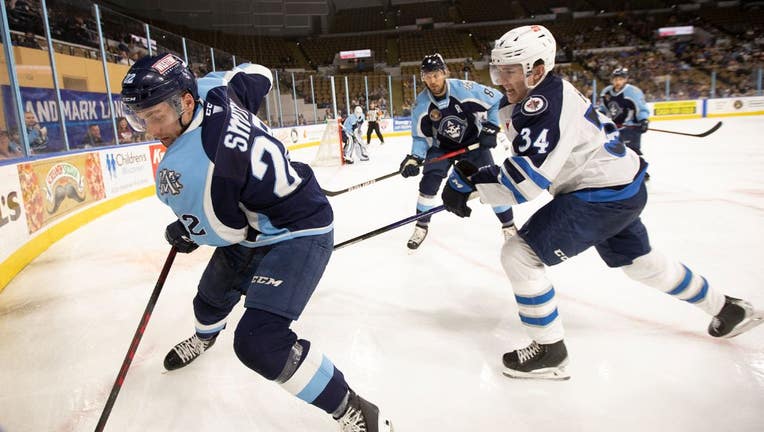 MILWAUKEE - The Admirals built themselves to an early 2-0 lead, but Manitoba scored five unanswered goals to top Milwaukee 5-2 and take game three of the best-of-five Central Division semifinal.

The Ads still lead the series 2-1 and will have another chance to close things out in game four this Friday, May 13 at 7 pm in Winnipeg.

The Admirals got on the board just 21 seconds into the game as Winnipeg native Cody Glass, who was assigned from Nashville on Wednesday, picked up the rebound of a Jeremy Davies shot and lifted a backhand over Manitoba goalie Mikhail Berdin.

That goal by Glass broke an Admirals record for the fastest goal to start a playoff game, breaking the old mark of 28 seconds set way back in 1998 by Jason Cipolla.

Milwaukee would go up 2-0 with just under three minutes to play in the first. Cole Schneider created a turnover on the forecheck and then fed a streaking Jimmy Huntington for his second goal in as many games.

Manitoba got one back at the 3:52 mark of the second off a one-timer from Morgan Barron while the Moose were on the power-play and then they tied the score at two courtesy of Jeff Malott’s first of the playoffs.

Leon Gawanke gave the Moose their first lead of the series with 2:30 remaining in the second period.

Manitoba picked up an insurance tally when Nicholas Jones’ shot from the high slot snuck through traffic and past a screened Devin Cooley. Luke Johnson finished the scoring for Manitoba with his first of the post-season at 12:38 of the third period.

The Admirals finished the game 0-for-7 on the power-play, while the Moose converted on two of the four chances they had with the man advantage.