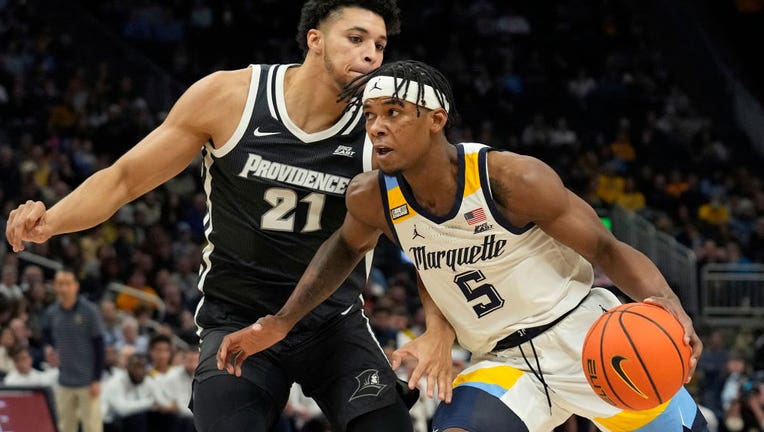 MILWAUKEE, WISCONSIN - JANUARY 18: Chase Ross #5 of the Marquette Golden Eagles dribbles the ball against Clifton Moore #21 of the Providence Friars during the first half at Fiserv Forum on January 18, 2023 in Milwaukee, Wisconsin. (Photo by Patrick

MILWAUKEE - Kam Jones had 21 points and Tyler Kolek scored 19 as No. 20 Marquette defeated No. 22 Providence 83-75 on Wednesday night.

With members of Marquette’s 2003 Final Four team, including former NBA great Dwyane Wade, cheering them on from the stands, the surging Golden Eagles won for the sixth time in seven games.

"It was a heck of a night for Marquette," Golden Eagles coach Shaka Smart said. "(Wade) gave the pregame talk to the guys. His message was really, really powerful."

Olivier-Maxence Prosper added 13 points for Marquette. Kolek also had eight rebounds and six assists in a physical matchup between two of the Big East's top teams.

"This team, the belief we have in each other, we can play with anybody," Jones said. "We’re not scared of anybody. We’ll give you our best game, no matter who it is. The Big East is one of the toughest conferences, if not the best."

Marquette withstood another strong performance from Bryce Hopkins, who had 19 points and 10 rebounds for the Friars — although he was held to six points in the second half. Hopkins, a Kentucky transfer, came in averaging 16.2 points and 9.1 rebounds per game.

Providence played again without Jared Bynum, sidelined with an abdominal injury. The senior point guard has missed the past three games.

The Friars (14-5, 6-2 Big East) lost their second in a row following a nine-game winning streak.

Ed Croswell led Providence with 20 points, and Devin Carter had 18.

"I thought our effort was fantastic but our synergy offensively was not there," coach Ed Cooley said.

The Golden Eagles (15-5, 7-2) avenged a 103-98 double-overtime loss to the Friars in Providence on Dec. 20 to take over second place in the conference standings behind Xavier.

"It’s a really good win for us tonight but it’s also something we can build on because I don’t think any guy on our team is satisfied," Smart said. "I think there’s a lot of growth we can make from this game."

Marquette led by 14 in the second half but couldn't shake the scrappy Friars. Providence pulled within five with about 50 seconds remaining before a pair of free throws by Kolek pushed the lead back to seven. Kolek sealed the game with four more free throws in the final seconds.

After leading by 11 in the first half, Marquette held a 38-31 advantage at the break as both teams shot 48%. Providence attempted just three first-half free throws, making one, while the Golden Eagles were 6 of 8 from the line. Hopkins led all scorers with 13 points in the half, although he was whistled for a technical foul midway through.