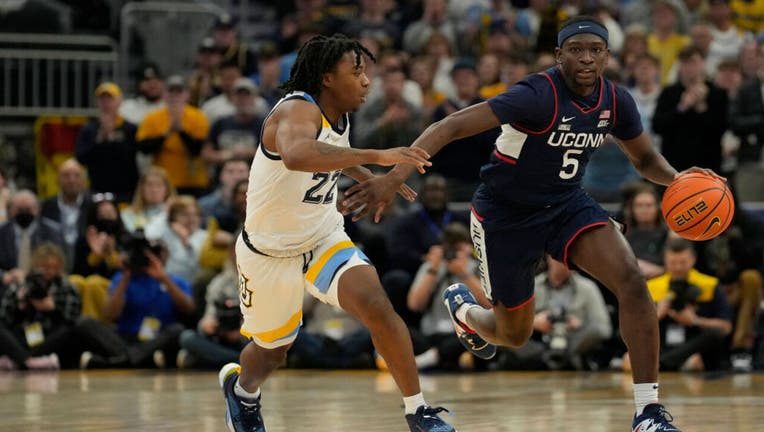 MILWAUKEE - Oso Ighodaro scored 19 points and showed some uncharacteristic free-throw accuracy down the stretch as No. 25 Marquette defeated No. 6 UConn 82-76 on Wednesday for its fifth consecutive victory.

Marquette (14-4, 6-1 Big East) erased an early 11-point deficit and outscored UConn 49-39 over the final 20 minutes to continue its recent trend of second-half surges. The Golden Eagles have trailed at halftime in each of their last three wins, which includes a 96-85 victory at St. John’s and a 95-73 blowout of Georgetown.

The Golden Eagles have shot 62.5% after halftime in those three games.

Olivier-Maxence Prosper scored 17 points and Kam Jones added 15 - all in the second half - for Marquette.

UConn lost despite getting 20 points, 10 rebounds and five blocks from 7-foot-2 freshman Donovan Clingan off the bench. Alex Karaban added 17 points and Adama Sanogo had 10.

This marked the first time UConn has lost to Marquette since rejoining the Big East in 2020-21. The Huskies had gone 4-0 since against the Golden Eagles, who beat UConn for the first time since Jan. 1, 2013.

After trailing by eight with less than two minutes left, UConn got the margin down to three on two occasions. But Marquette answered each time.

Ighodaro got fouled with 36.2 seconds left and hit both free throws to give the Golden Eagles some breathing room. Ighodaro sank two more free throws with 11 seconds left to cap the scoring.

Ighodaro had been just 16 of 38 on free-throw attempts this season before hitting those four.