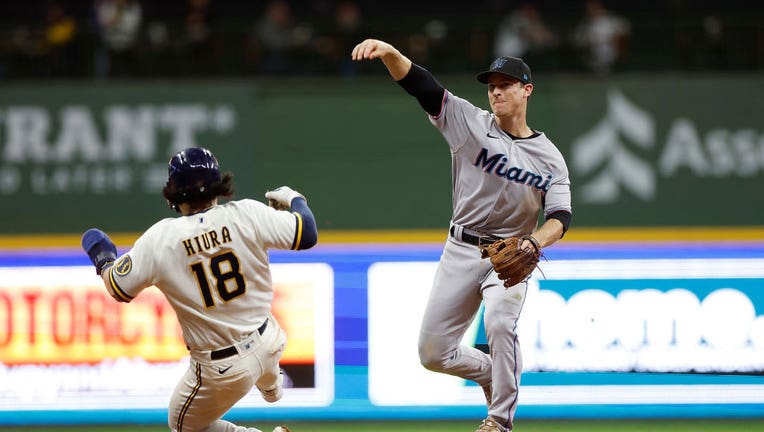 MILWAUKEE, WISCONSIN - SEPTEMBER 29: Joey Wendle #18 of the Miami Marlins turns a double play as Keston Hiura #18 of the Milwaukee Brewers slides into second base in the sixth inning of the game at American Family Field on September 29, 2022 in Milwa

MILWAUKEE - Avisaíl García came off the injured list and hit a grand slam in the eighth inning in the Miami Marlins' 4-2 victory over the Milwaukee Brewers on Thursday night.

The loss left Milwaukee a half-game behind Philadelphia for the final NL wild-card berth. The Phillies lost their fifth straight, 2-0 to the Cubs in Chicago.

The Brewers have six games remaining over the next six days, all at home — three more against Miami and three against Arizona. The Phillies have seven games to go, all on the road. They play four games at Washington, starting with a doubleheader Friday, then three at Houston.

García, who was with the Brewers in 2020 and 2021, was put on the injured list Sept. 13 with a left hamstring strain. He was sent to Triple-A Jacksonville for a rehab assignment Monday before being activated Thursday.

Milwaukee was leading 2-0 when Peralta came on in the seventh inning and retired the side in order. In the eighth, he gave up two singles and a walk, loading the bases before García unloaded on a 1-2 pitch, a 95 mph fastball.

Peralta, who has started 16 games, made his last start Sept. 25, when he was activated from the 15-day injured list and pitched two innings. He had been suffering from right shoulder inflammation.

Milwaukee starter Eric Lauer pitched five shutout innings, striking out nine and giving up one hit and no walks while throwing 71 pitches. The left-hander had pitched 2 2/3 innings in his previous start, on Sept. 23, after returning from the injured list with left elbow inflammation.

Milwaukee lost a potential run when Hiura tried to steal third base and was thrown out by catcher Nick Fortes. The next batter, Victor Caratini, singled to centerfield.

In the sixth inning, Marlins right-hander Jeff Brigham lifted a leg and shook his arms in celebration when, after giving up two doubles and a walk to load the bases, he got Caratini to hit into an inning-ending double play.