MANCHESTER, United Kingdom (AP) - Anti-ownership protests by Manchester United fans forced the postponement of Sunday's Premier League game against Liverpool as supporters stormed the stadium and reached the pitch, while thousands of others gathered outside Old Trafford to demand the Glazer family ownership sell the club.

Long-running anger against the American owners has boiled over after they were part of the failed attempt to take United into a European Super League. Supporters have been kept out of games due to the coronavirus pandemic.

United and Liverpool players were unable to travel to the stadium where there were clashes briefly between fans and the police under a shower of glass bottles as flares were sent off. 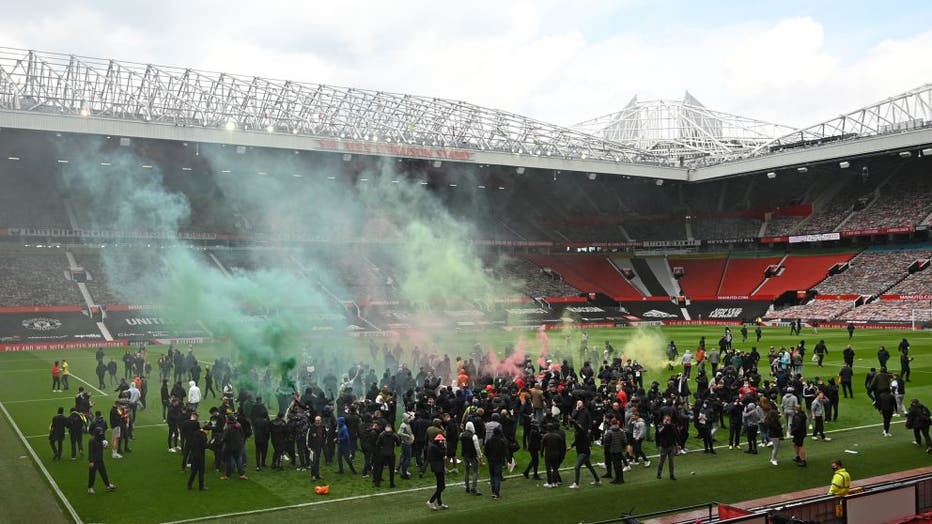 Although the crowds were later dispersed around the time the game was due to start, United said the game was postponed "due to safety and security considerations around the protest" after discussions with police, authorities and the league.

"Our fans are passionate about Manchester United, and we completely acknowledge the right to free expression and peaceful protest," United said in a statement. "However, we regret the disruption to the team and actions which put other fans, staff, and the police in danger. We thank the police for their support and will assist them in any subsequent investigations."

The Premier League, which was yet to announce a new date for the match, expressed concern about the disorder.

"The security and safety of everyone at Old Trafford remains of paramount importance," the Premier League said in a statement. "We understand and respect the strength of feeling but condemn all acts of violence, criminal damage and trespass, especially given the associated COVID-19 breaches. Fans have many channels by which to make their views known, but the actions of a minority seen today have no justification.

"We sympathize with the police and stewards who had to deal with a dangerous situation that should have no place in football."

The Glazers, who also own the NFL’s Tampa Bay Buccaneers, have declined to engage with fans since buying United in 2005 in a leveraged takeover that loaded debt onto the club.

"Get out of our club," fans chanted as flares were set off. "We want Glazers out." 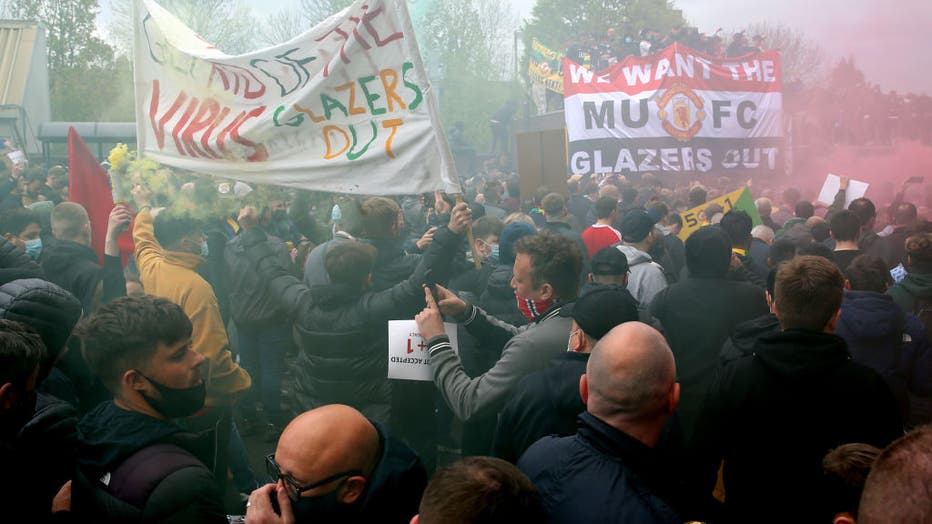 Fans hold up banners as they protest against the Glazer family, owners of Manchester United, before their Premier League match against Liverpool at Old Trafford, Manchester. Issue date: Sunday May 2, 2021. (Photo by Barrington Coombs/PA Images via Ge

Fans found a way into the stadium and also climbed onto vantage points next to turnstile entrances.

Supporters wore green-and-gold scarves and also set off flares in the colors of the club’s 1878 formation. More than 100 fans got inside the stadium and some could be seen from windows waving down to protesters. Corner flags were held aloft and one supporter was seen throwing a tripod from the interview zone.

Police on horseback later cleared protesting fans from outside the stadium, with glass bottles being thrown in brief clashes. Some fans moved back to a main road near the stadium with police forming a line to stop them returning.

If United had lost the planned game, Manchester City would have won the Premier League title. United is the record 20-time English champion but hasn’t lifted the trophy since 2013.

United and Liverpool were among six Premier League clubs that tried to form an exclusive European Super League along with three clubs each from Spain and Italy. Widespread opposition quickly ended the project, with all six English teams backing out within 48 hours of the announcement.

The "Big 6" clubs have been in damage control since, offering various forms of apologies and statements of regret, while fans long frustrated with billionaire owners have called for wholesale changes.