SAN DIEGO — Dick Enberg, a Hall of Fame broadcaster known as much for his excited calls of "Oh my!" as the big events he covered during a 60-year career, has died. He was 82.

Enberg's daughter, Nicole Enberg Vaz, confirmed the death to The Associated Press. She said the family became concerned when her father didn't arrive Thursday on his flight to Boston, and he was found dead at his home in La Jolla, a San Diego neighborhood, with his bags packed.

His daughter said the family believes Enberg died of a heart attack but was awaiting official word. 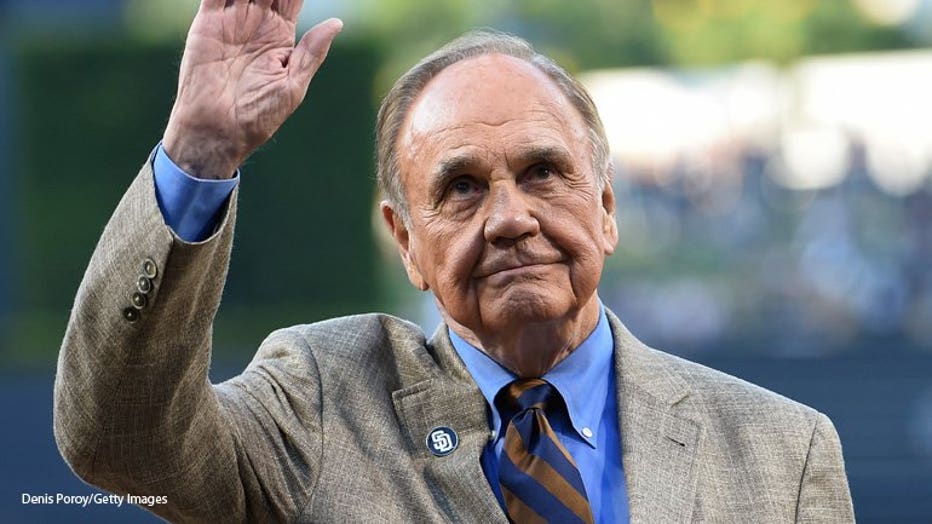 "It's very, very, very shocking," said Vaz, who lives in Boston. "He'd been busy with two podcasts and was full of energy."

Enberg's wife, Barbara, already was in Boston and was expecting his arrival.

The family "is grateful for the kind thoughts and prayers of all of Dick's countless fans and dear friends," according to a statement released by Enberg's attorney, Dennis Coleman. "At this time we are all still processing the significant loss, and we ask for prayers and respectful privacy in the immediate aftermath of such untimely news."

Enberg got his big break with UCLA basketball and went on to call Super Bowls, Olympics, Final Fours and Angels and Padres baseball games as well as Rams football games. 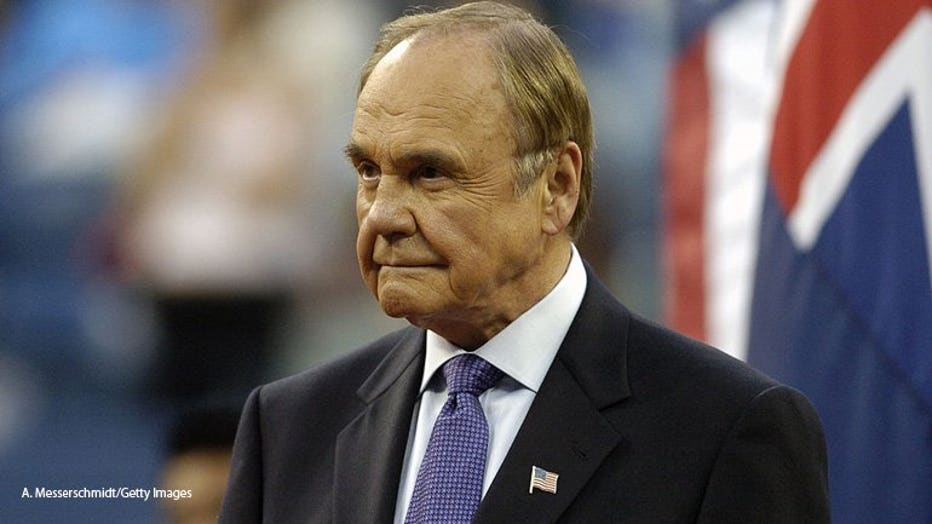 TV announcer Dick Enberg hosts the award ceremonies after the men's singles final September 12, 2004 at the 2004 US Open in New York. Roger Federer won the tournament. (Photo by A. Messerschmidt/Getty Images)

He retired from his TV job with the Padres in October 2016, capping a six-decade career punctuated with countless calls of "Oh my!" in describing big plays. He also was well known for his baseball catchphrase of "Touch 'em all!" for home runs.

"Dick was an institution in the industry for 60 years and we were lucky enough to have his iconic voice behind the microphone for Padres games for nearly a decade," Padres owners Ron Fowler and Peter Seidler said in a statement.

Raised in Armada, Michigan, Enberg's first radio job was actually as a radio station custodian in Mount Pleasant, Michigan, when he was a junior at Central Michigan. He made $1 an hour. The owner also gave him weekend sports and disc jockey gigs, also at $1 an hour. From there he began doing high school and college football games.

During his nine years broadcasting UCLA basketball, the Bruins won eight NCAA titles. Enberg broadcast nine no-hitters, including two by San Francisco's Tim Lincecum against the Padres in 2013 and 2014.

He said the most historically important event he covered was "The Game of the Century," Houston's victory over UCLA in 1968 that snapped the Bruins' 47-game winning streak.

"That was the platform from which college basketball's popularity was sent into the stratosphere," Enberg said just before retiring from the Padres. "The '79 game, the Magic-Bird game, everyone wants to credit that as the greatest game of all time. That was just the booster rocket that sent it even higher. ... UCLA, unbeaten; Houston, unbeaten. And then the thing that had to happen, and Coach Wooden hated when I said this, but UCLA had to lose. That became a monumental event."

Enberg's many former broadcast partners included Merlin Olsen, Al McGuire, Billy Packer, Don Drysdale and Tony Gwynn. He even worked a few games with Wooden, whom he called "The greatest man I've ever known other than my own father."

Enberg called Padres games for seven seasons and went into the broadcasters' wing of the Baseball Hall of Fame in 2015 as the recipient of the Ford C. Frick Award.

"There will never be another Dick Enberg," CBS Sports Chairman Sean McManus said. "As the voice of generations of fans, Dick was a masterful storyteller, a consummate professional and a true gentleman. He was one of the true legends of our business."

John Ireland, the radio voice of the Los Angeles Lakers, tweeted : "If there was a Mount Rushmore of LA Sports Announcers, Dick Enberg is on it with Chick Hearn, Vin Scully and Bob Miller. Rams, Angels, UCLA, NBC, and so much more. Was the first famous announcer I ever met, and he couldn't have been nicer. Definition of a gentleman."

Enberg won 13 Sports Emmy Awards and a Lifetime Achievement Emmy. He received a star on the Hollywood Walk of Fame, and UCLA named its Media Center in Pauley Pavilion after Enberg this year.

At halftime of a UCLA game in February, former Bruins stars Bill Walton and Jamaal Wilkes presented Enberg with a No. 8 jersey, signifying the number of championships he called.

"That's not going to happen again," Enberg said before the game. "Who was looking over me? To be able to come in and ride the Wooden Wave."

"Kindest, most proactive possible treatment of newcomers in this business, for the length of his career," broadcaster Keith Olbermann said of Enberg on Twitter . "What a terrible loss."

The Hollywood Chamber of Commerce said flowers will be placed Friday on Enberg's star on the Walk of Fame.

Marquette University issued the following statement on the passing of Enberg:

"The Marquette University community mourns the passing of legendary broadcaster Dick Enberg, a dear friend to Marquette and a close friend and colleague of Al McGuire. Enberg honored that friendship by writing a wonderful one-act play, McGuire. We’re thankful that he was able to see that play come to life on our campus.

"The recipient of an honorary doctor of letters degree from Marquette in May 2009, we were proud to have Dick Enberg serve as our Commencement speaker. At that time, he noted the importance of saying thank you.

"“The message is: thank you, two words of empowerment for all who use them. And when written bring even an added feeling of warmth to the recipient and bonus power to the sender. Thank you. Say it, write it, with conviction. Why don’t we use it more often? It’s free. Why not try it out today, to Mom and Dad or a classmate or favorite professor? Thank you.”


"The Marquette University community says thank you to Dick Enberg for inspiring our students and alumni across the world. We offer prayers of comfort to his family and friends during this difficult time."