No shortage of black belts, toughness for karate family of 8

The Kappus family from Cudahy is one you don't want to mess with because all the kids are pretty good at karate.

CUDAHY, Wis. - The Kappus family from Cudahy is one you don't want to mess with because all the kids are pretty good at karate.

It's great," said Caroline Kappus. "It's just like, we all can be dedicated to it. I think that was awesome, especially sticking with it throughout all the years and all the life changes that we've gone through as a family. I think it's just really awesome."

Earning a black belt means that person has reached the highest level in various arts of self-defense such as judo and karate. The process can take almost a decade of work to achieve.

"It was a big shock at the end, even though I felt I did good," said Steven Kappus, a student at Mukwonago High School. "Still, getting it was very rewarding, and after working so hard for all these years, it was a great experience to finally have something that really means something and proves that all the work paid off." 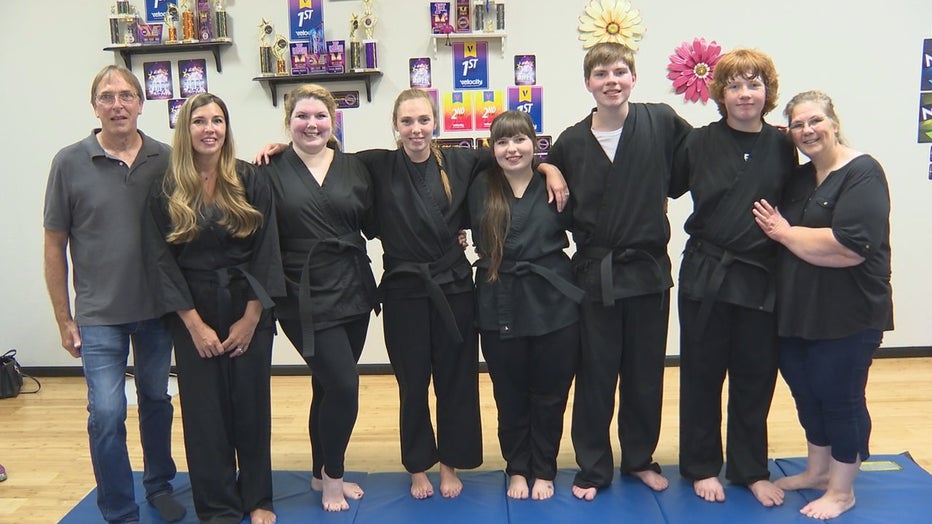 It's been a long journey for the boys after the pandemic shut things down, and they had to find a new place to train. They've trained at the St. Francis Rec Department and in the basement and cafeteria of St. Veronica's Parish in Milwaukee.

"It was really hard at first. Like, I really wondered if I'd ever come back at all," said Steven. "Then we came back. It was a really weird start. Me and my brother really had to work to get back in, but we were rusty. We had it all there, but we just had to work a lot harder to get back to where we were and continue to move further for the black belt."

Now, they've finally caught up to their four older sisters, who all have their black belts, as well.

"It was really cool," said Caroline. "It was really awesome just because we are a group of girls, you know? Well, the first four of us were girls, so it just felt like girl power, like, ‘Oh, we got this.’ Like, ‘We did this.’"

In a nice surprise, Steve and Sandra also received honorary black belts to join their kids.

They still drive 30 miles each way to take the boys to karate, and their dedication to this craft has continued for 26 years.

"I was very proud. It's very exhilarating," said Sandra Kappus. "I never thought we'd get to where we are right now, but as each child got their black belt, I was just determined the next one was getting it, too. Like, it just became a way of life in our family."

It started in 1996 when the Kappus' wanted their oldest daughters to learn some self-defense, and since then, they've all been under the tutelage of Jeff Obst.

"It's not just the physical part. It's not just about being able to kick high or do the different things to protect yourself," said Jeff Obst, the senior instructor of Shihan for the St. Francis Rec Department. "There's also the whole part about the development of the individual. Things that seem impossible to do, they can accomplish it."

And as you can imagine, in a family full of black belts, they can have some fun.

"We mess around, but it's never anything serious outside of karate," said Caroline.

"The TV almost went over one time," said Sandra. "They do, everybody thinks they're the toughest one."

Amidst all the sibling fun, karate has taught them so much.

"It's an art that changes their soul because there are so many morals and so much comes out of this to help build their character," said Sandra.

Above everything else, it means more time with family, which is the most priceless gift of all.