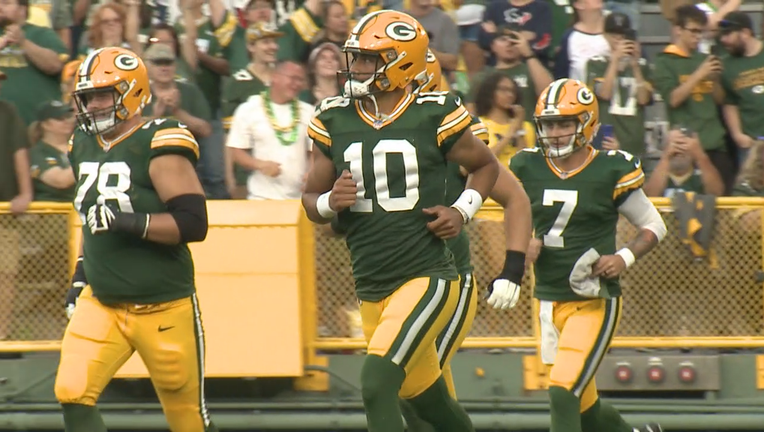 Jordan Love takes the field ahead of the Packers' preseason opener against the Texans. (FOX6 News Milwaukee)

GREEN BAY, Wis. - The summer of waiting for Jordan Love is gone.

He has now played as a Green Bay Packer for the very first time.

He didn't do it at all as a rookie because it was the pandemic.

And then he was the number three quarterback, inactive every game, but he played on Saturday night against the Houston Texans.

"I say the biggest difference is your live practice you're not getting hit so you're not worried about taking a sack and getting hit and getting the ball off on time," said Love. "But in the game, you know, you've got that added element. You've got to be able to get the ball off on time, see pressures, throw when you're hot, try not to take those hits."

Packers head coach Matt LaFleur said Love was fine, but he'd like to see him let it rip. Any time you give a quarterback the opportunity to let it rip, he'll take it.

"No, I don't think it's overthinking at all," Love said. "I think it's just finding that rhythm, be able to let it rip all the time."

"I think it's a byproduct of him not playing for two years," said LaFleur. "There was a lot of space in there when we were running some of our play actions. But I thought his rhythm and timing, it looked like it was pretty good."

You don't expect guys to get all worked up in the preseason and Love fits that description. In fact, he's pretty mellow all the way around.

One down for Jordan, two to go with only three preseason games this year.

The Packers are going to feature Love, who dinged his shoulder a little bit on Saturday night, but expects to be ready to go next week against the New York Jets.

The Jets and Packers will practice against each other this week in Green Bay.