It`s time for baseball in Milwaukee! A lot of work goes into ensuring Opening Day`s a success

It`s time for baseball in Milwaukee! A lot of work goes into ensuring Opening Day`s a success

MILWAUKEE -- Opening Day for the Milwaukee Brewers is Monday, April 4th -- and the Brew Crew will face the San Francisco Giants at 1:10 p.m. at Miller Park. There is a lot of work that has gone into ensuring it will be a good day at the ball park. 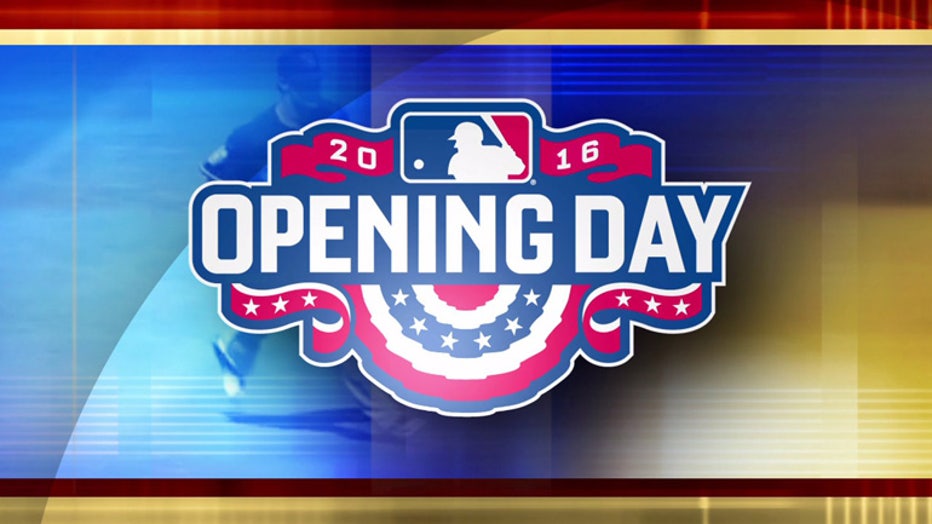 "Everyone`s pumped up about Opening Day. It`s a city celebration for us," Katina Shaw, director of community relations for the Milwaukee Brewers said.

And the party kicks off on Monday! 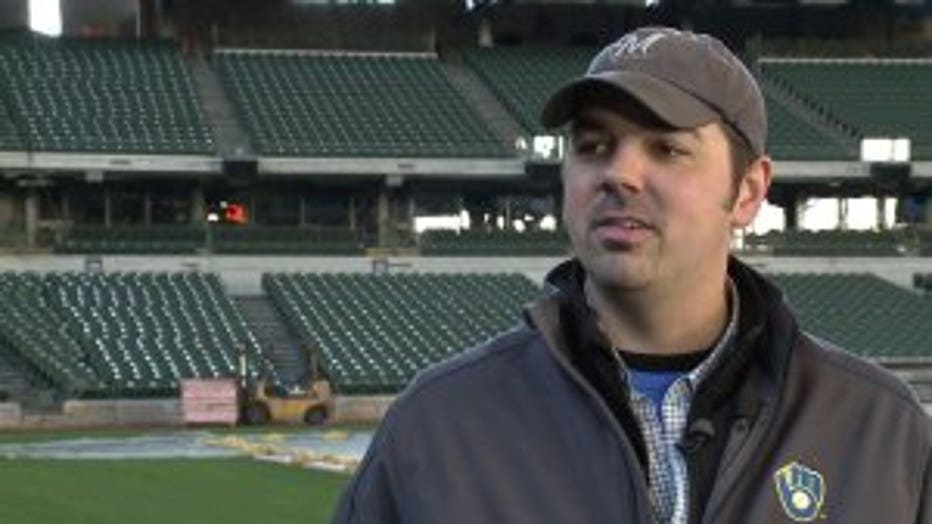 "I think it`s just excitement that gets started here every spring in Milwaukee with baseball," Director of Grounds Michael Boettcher said.

In early March, when temperatures reached 65 degrees, Brewers grounds crews pulled back the tarps covering the turf, and opened the roof.

"The natural sun -- you can`t replace it. Our grow lights only give a percentage of what the sunlight can do," Boettcher said. 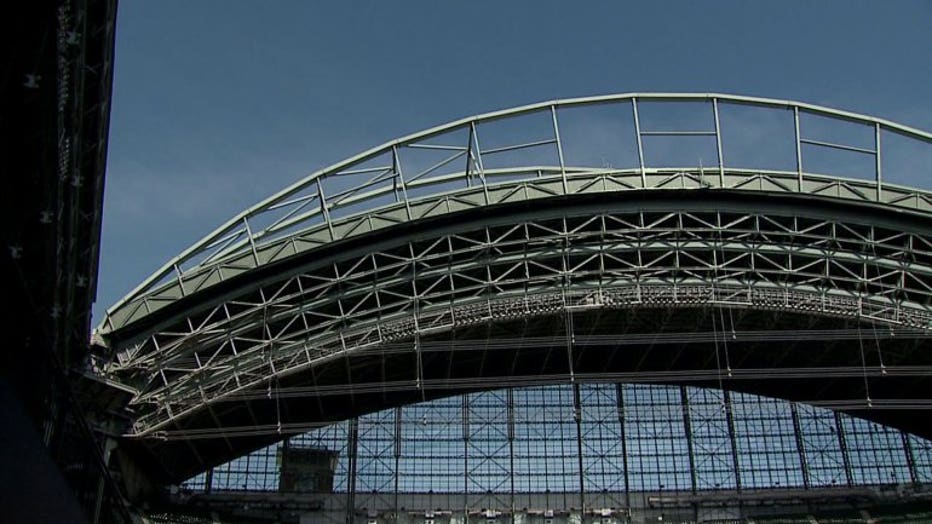 Grounds crews are pleased with how the turf looks after our mild winter in Milwaukee. 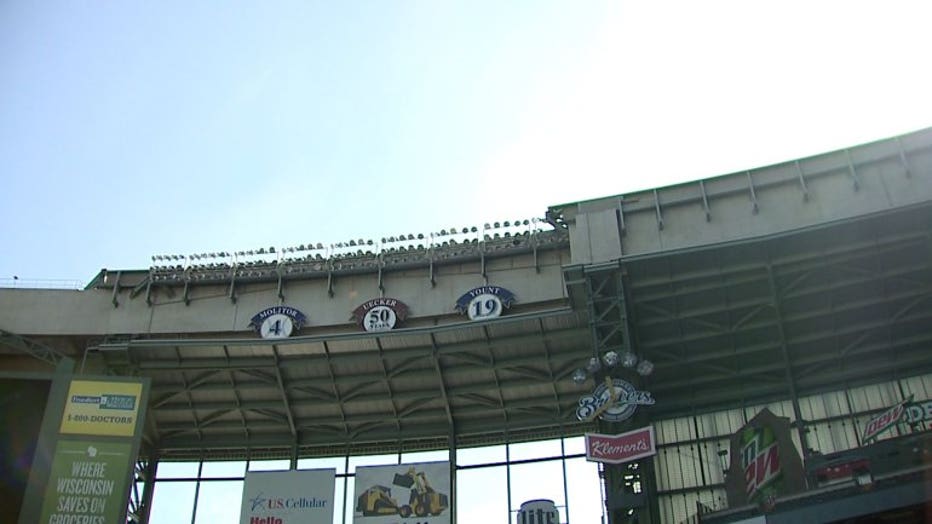 In an effort to increase safety this season, Miller Park officials have installed some additional netting to protect fans.

Last year, a fan was seriously hurt when she was hit in the face by a foul ball.

The added netting will protect fans from foul balls and any flying bats. 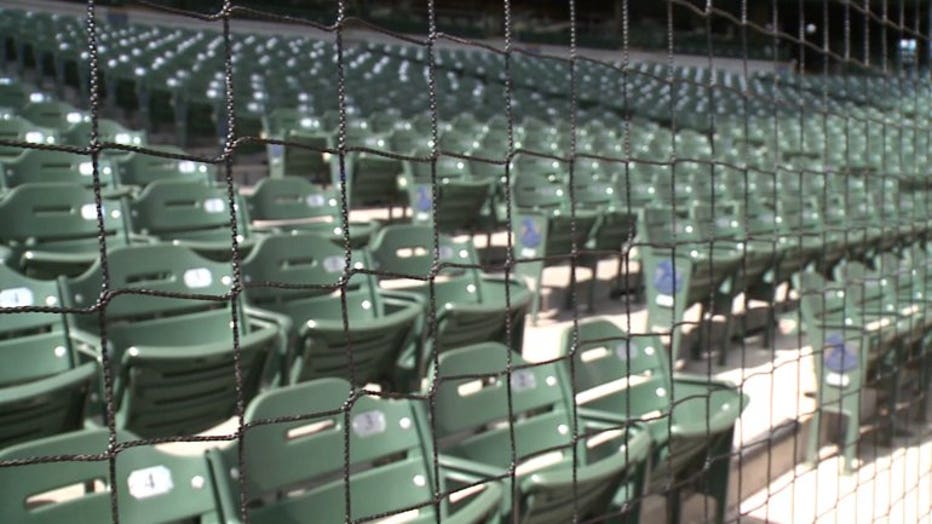 And of course, there are plenty of new food items for fans to try at Miller Park this season.

The new offerings include: 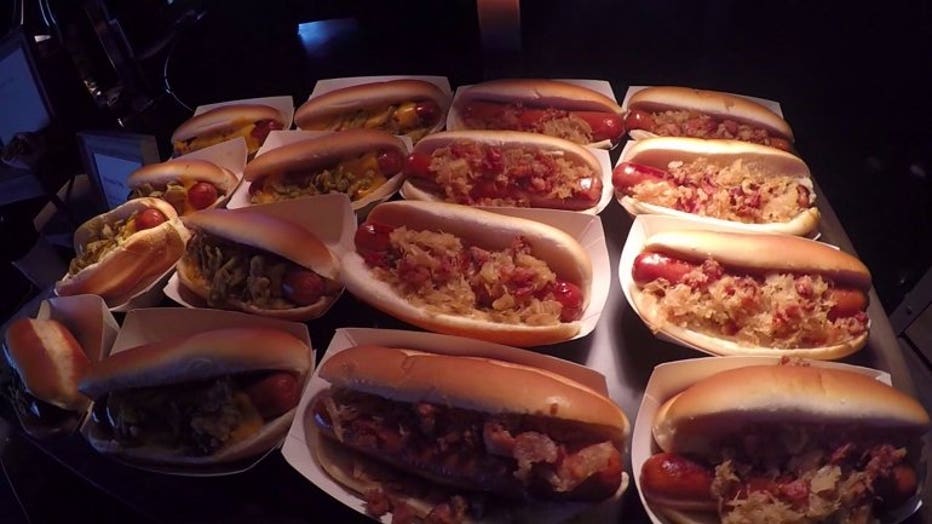 "The Wisconsin Dog, which is a beer jam sauerkraut and bacon on our new sausage roll, and then our Jalapeno Popper Dog which is cheese and fried jalapenos," Seth VanderLaan, Brewers executive chef said. 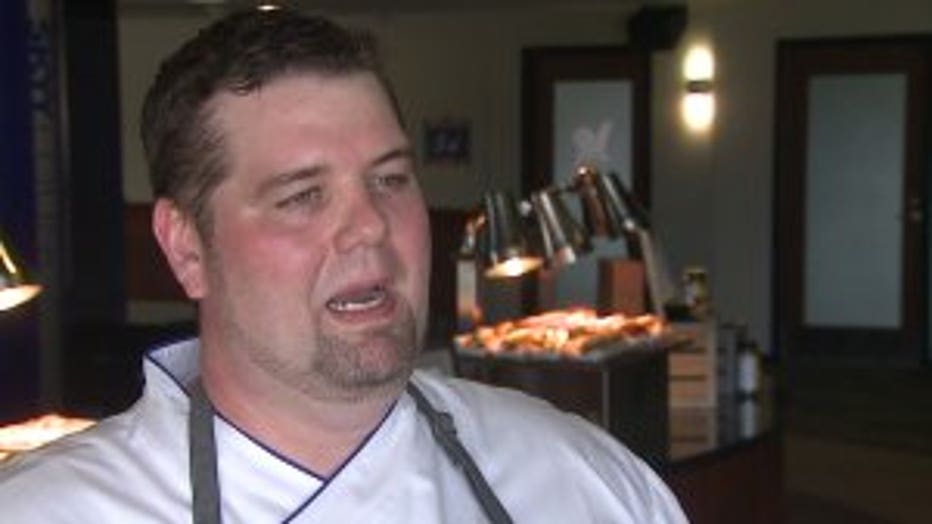 For fans looking to wear their Brew Crew spirit, there are new clothing items available as well, including jerseys and hats. 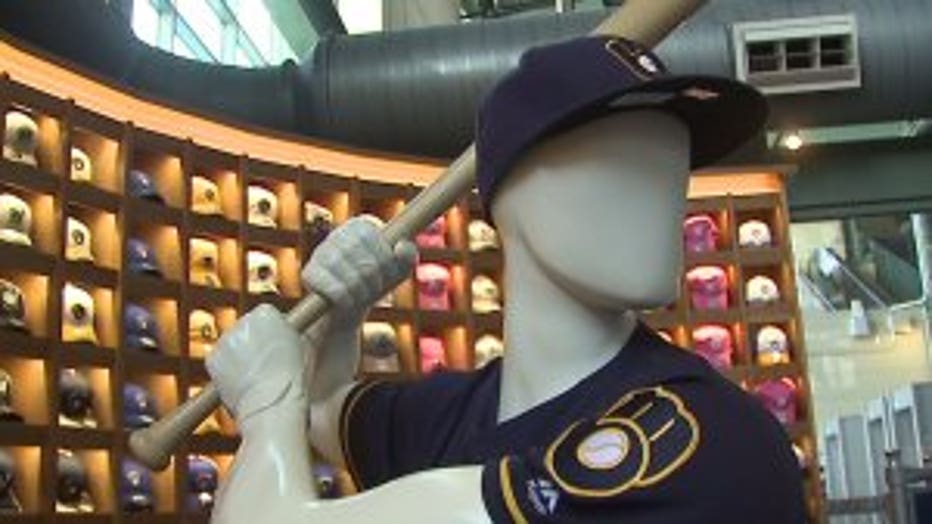 Work was underway to add the "Opening Day" logo behind home plate just in time for Monday.


Beginning on Opening Day, and for every home game this season, the MCTS Brewers Line is the easiest way to get to Miller Park to cheer on the Brewers.

Catch the Brewers Line (Route 90 - Miller Park) along Wisconsin Avenue and travel directly to the MCTS transit area at Miller Park starting with the season home opener on April 4th. The Brewers Line is a safe, easy, convenient and cost effective way to get to a Brewers game. Fans can leave the traffic and parking hassles at home by simply hopping on board at any of the 21 stops along Wisconsin Avenue, and head straight to the park. 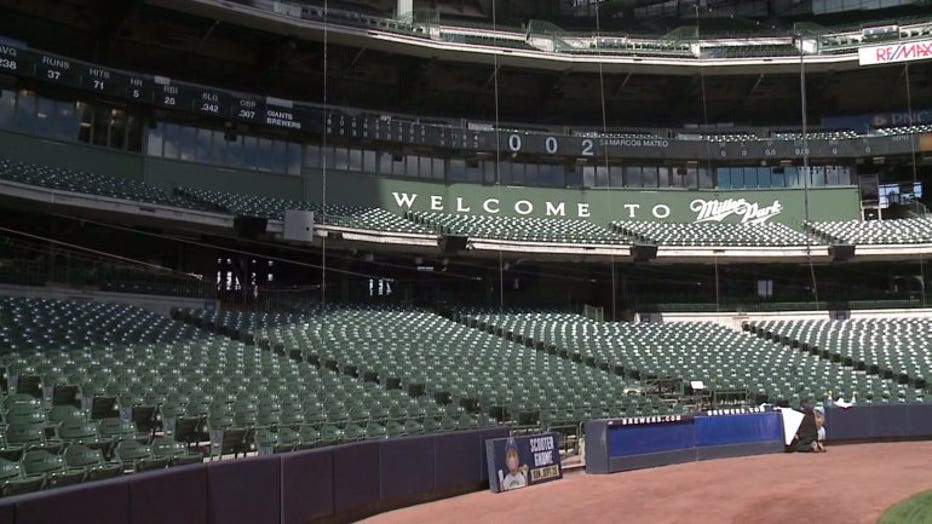 The Brewers Line buses operate approximately every 30 minutes for two hours before game time (except on opening day and Marquee games when buses operate more frequently). Return trip bus service leaving Miller Park operates for one half-hour after the end of the game.

Brewers Line bus stops are located at the Downtown Transit Center and along Wisconsin Avenue from Jackson Street to 38th Street. Look for electronic destination signs on the bus that display “Let’s Go Brewers!” Buses drop passengers off at the MCTS transit area on Yount Drive on the north side of Miller Park. On the return trip, buses leave the ballpark from the MCTS transit area and serve all eastbound bus stops.

Highlights include special Opening Day ceremonies as well as the first of 14 All-Fan giveaways of 2016.

Brewers Magnetic Schedule Day – All fans in attendance will receive a Brewers 2016 magnetic schedule presented By Pick 'n Save and Sargento.

Singles Night – What better place to meet someone than at a Brewers game? Join the Crew for Singles Night at Miller Park and take part in a special Mix & Mingle event hosted by It's Just Lunch prior to watching the Brewers take on the San Francisco Giants. This special ticket package includes a ticket in the All-Inclusive Miller Lite Deck, a full buffet, two complimentary beers and the opportunity to meet other single Brewers fans in a relaxed, casual environment.

Autograph Saturdays for Kids presented by U.S. Bank – Prior to the game, kids 14 and under can receive autographs from select Brewers players and coaches. Autograph sessions will begin shortly after gates open and last for approximately 20 minutes. For each Autograph Saturday game, one child will be selected to win a VIP package compliments of U.S. Bank®. The VIP package includes four Loge Level tickets to that night’s game, on-field batting practice viewing and more! Fans can register at Miller Park Field Level Guest Relations or online at Brewers.com/autographsaturdays.

Autism Awareness Day – The Brewers will host their third-annual Autism Awareness Day at Miller Park as Major League Baseball once again partners together with Autism Speaks to celebrate the unique gifts of individuals with autism, raise awareness of autism spectrum disorders and advocate for the needs of individuals and families affected by autism. In support of autism research and advocacy, the Brewers will make a $3 donation to Autism Speaks for every Autism Awareness ticket package sold.

Kids Eat Free Sundays – Every Sunday home game, all kids 14 and under will receive a voucher upon entrance to Miller Park good for a free hot dog, apple slices, a bottle of water and an ice cream treat, courtesy of Pick 'n Save, Blue Bunny & Heinz. 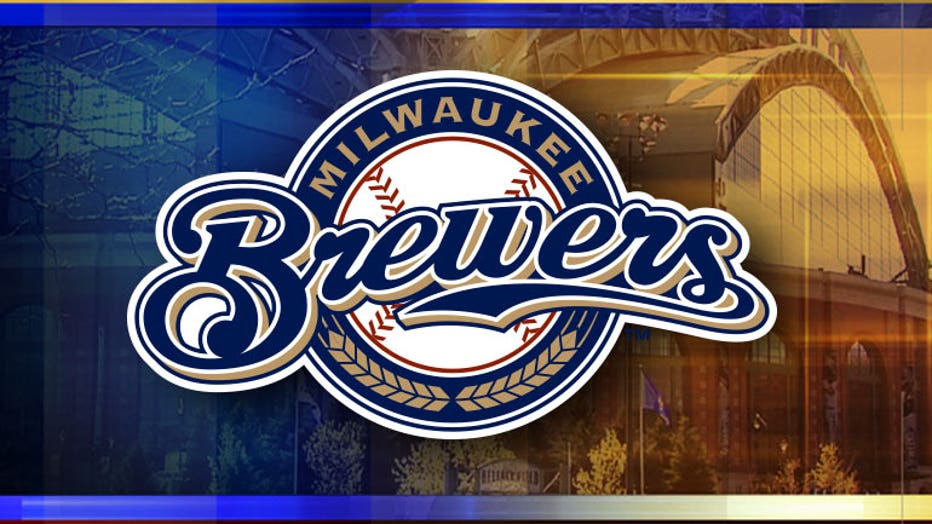