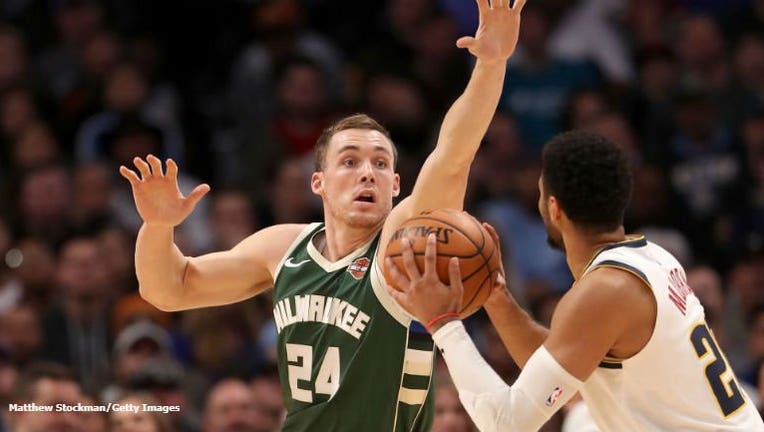 DENVER, CO - NOVEMBER 11: Pat Connaughton #24 of the Milwaukee Bucks tries to block the shot of Jamal Murray #27 of the Denver Nuggets at the Pepsi Center on November 11, 2018 in Denver, Colorado. NOTE TO USER: User expressly acknowledges and agrees

A news release says Connaughton is entering his sixth season in the NBA. He appeared in 67 games (4 starts) with the Bucks last season and averaged 5.4 points, 4.2 rebounds and 1.6 assists in 18.6 minutes per game. Originally signed by Milwaukee prior to the 2018-19 season, Connaughton is averaging 6.1 points, 4.2 rebounds and 1.8 assists over 128 games as a Buck while shooting 46.1% from the field the last two seasons.

A second round pick in the 2015 NBA Draft out of Notre Dame, Connaughton, 27, has appeared in 283 career games with Portland and Milwaukee and holds career averages of 4.8 points, 2.8 rebounds and 1.3 assists per contest. He’s also played in 38 playoff games in his career, 25 of which have come with the Bucks the last two seasons where he’s averaging 5.3 points, 5.3 rebounds and 1.3 assists in postseason action with Milwaukee.

Packers&#8217; Aaron Jones says he has confidence in team, despite OT loss

The Green Bay Packers could not pull off any overtime heroics in Indianapolis. But the team is still in a good spot -- sitting at 7-3 atop the NFC North.