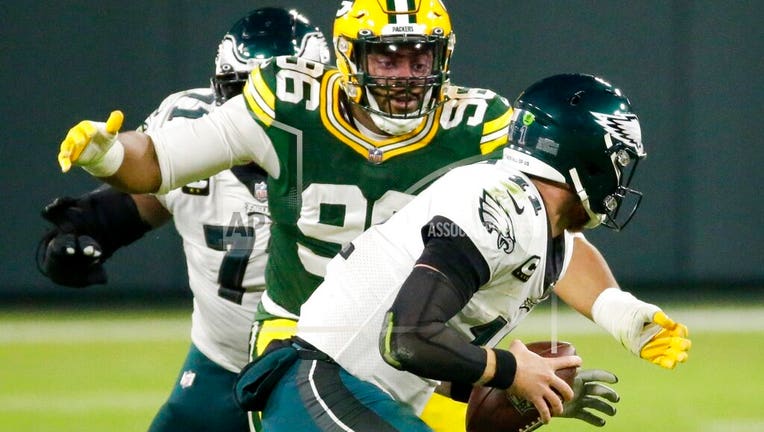 The Packers made seven sacks in a 30-16 victory over the struggling Philadelphia Eagles. The question now is whether this was the outburst Green Bay’s pass rush needed as it gears up for the playoffs or a mere reflection of Philadelphia’s season-long inability to protect its quarterback.

This marked the Packers’ highest sack total since they also had seven in a 22-0 triumph over the Buffalo Bills on Sept. 30, 2018.

“I think everybody was getting a little frustrated, man,” Smith said after the game. “Nobody upfront was having the type of year that they want, so we just knew.”

Smith said the Packers benefited from a pregame chat with defensive coordinator Mike Pettine regarding the game plan. Defensive tackle Kenny Clark and outside linebacker Preston Smith also were involved in the conversation.

“We told him, ‘If we can keep it simple, man, we will get after the quarterback,’ “ Smith said. “And he did that for us. And as you can see, we had a field day today.”

Although the Packers (9-3) haven’t yet clinched a playoff berth, they own a three-game lead over Minnesota (6-6) in the NFC North standings with four games left.

It’s important not to assume what the Packers accomplished Sunday will carry over to the rest of the season. Plenty of defenses have been similarly effective at harassing Eagles quarterbacks. The Eagles have allowed a league-high 53 sacks while going through 11 different starting offensive line combinations in 12 games. They’ve given up at least three sacks in 10 straight games.

But there undoubtedly were encouraging signs for the Packers.

Kingsley Keke had two sacks, his first two since another two-sack performance Sept. 27 at New Orleans. Rashan Gary continued his breakthrough sophomore season with 1 ½ sacks. The Packers also are starting to get the big plays from the Smiths that occurred so often a year ago, when they combined for 25 ½ sacks.

Last week, Za’Darius Smith sacked Mitchell Trubisky and forced a fumble that Preston Smith returned 14 yards for a touchdown in a 41-25 victory over the Chicago Bears. The Smiths, who aren’t related, teamed up for one of the biggest plays of Sunday’s game.

After narrowing a 23-3 deficit to 23-16, the Eagles had the ball at their 41 with less than four minutes left when the Smiths sacked Hurts. Philadelphia threw an incompletion on the next play, punted and never threatened again.

“We’re definitely on the right path coming," Keke said. “And this is a good time, especially in December moving into playoff time soon."

The Packers gained 6 yards per carry, helped quite a bit by Aaron Jones’ 77-yard game-clinching touchdown. … Aaron Rodgers continues to play at an MVP level. … The defense is producing more big plays.

Special teams remain an issue. The Packers have allowed touchdowns on punt returns in two of their last four games, including Jalen Reagor’s 73-yarder on Sunday. … The Packers could do a better job of finishing games. They let a 20-point lead shrink to seven Sunday before putting the Eagles away. One week earlier, they allowed two fourth-quarter touchdowns against Chicago after they’d built a 31-point lead.

Rodgers has completed 73% of his passes for seven touchdowns and no interceptions over his last two games. … Adams has caught a touchdown pass in seven straight games to tie the franchise record. Hall of Famer Don Hutson had a pair of seven-game streaks in 1941-42 and 1943-44. … Safety Darnell Savage has picked off three passes over his last two games. … Za’Darius Smith had 1 ½ sacks to increase his season total to 10 ½.

The Packers attempt to complete a season sweep of the Lions when they visit Detroit on Sunday. Green Bay beat the Lions 42-21 at home on Sept. 20.