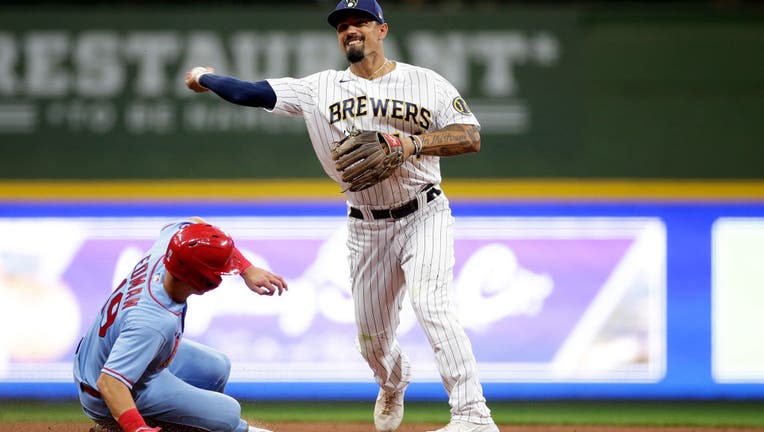 MILWAUKEE, WISCONSIN - SEPTEMBER 04: Jace Peterson #14 of the Milwaukee Brewers attempts to turn a double play as Tommy Edman #19 of the St. Louis Cardinals slides into second base in the seventh inning of the game at American Family Field on Septemb

Not since Kyle Lohse blanked Cincinnati on two hits on Sept. 24, 2014, had a Milwaukee pitcher gone the distance without allowing a run. The Brewers had played 1,011 games since then, marking the longest active streak in the majors.

"It’s hard to do," manager Craig Counsell said. "Credit to Adrian for getting it done."

Houser (8-6) didn’t allow a runner until Nolan Arenado led off the fifth inning with a single. The 28-year-old righty struck out seven, walked none and blanked the playoff-contending Cardinals on 100 pitches.

"It was a gem, there's no question about it," Counsell said.

This was Houser's first pro shutout. It came in his 51st start in the majors — he also started 114 times in the minors during a career that began in 2011 in the Houston organization.

An above-average sinker got him to the big league level and helped him throw first-pitch strikes to 20 of his first 22 batters.

"That’s just been a product of all the work we’ve been putting in between starts, finally getting back able to establish that back door sinker to use it well and finally be effective with it," Houser said. "I think they weren’t picking that up well and I was able to go back and forth with it."

Luis Urias led off the Milwaukee first with his 19th home run, the only run that Houser and the NL Central leaders needed.

"If you give a pitcher who’s really locked in a lead like that and it makes it harder to get him out of that zone because he feels like he’s got a little room," Counsell said.

The Brewers added three runs in the second on RBI singles by Rowdy Tellez and Urias and a ground-rule double by Luke Maile.

Kim exited with two outs in the second after Willy Adames got Milwaukee's seventh hit.

The Cardinals were hoping to build off their 15-4 thrashing of Milwaukee in the series opener as they try to chase down Cincinnati for the second and final NL wild-card spot.

"Momentum can (carry) over to the next day but but a good start can stifle it," Shildt said.

On the bright side, despite losing their starter two innings into the game, the Cardinals will have a rested bullpen at their disposal Sunday when they try for a series victory thanks to Woodford's effort.

"He set us up to give a chance today to compete and also, by eating those innings, allowed us to save our bullpen and compete moving forward at the beginning of a 13-game stretch," Shildt said.

Cardinals: LHP Andrew Miller threw a bullpen session without issue and could return from the injured list sometime in the next week, Shildt said.

Brewers: SS Willy Adames will be re-evaluated Sunday after re-aggravating his left quad while running to first on a fifth-inning single. Adames recently missed three games for a similar injury.

The Highland Games were almost canceled for a second year due to the pandemic, but some passionate bagpipers were not going to let that happen.

Five people were injured – three flown to the hospital – in a two-car Ozaukee County crash on Saturday afternoon, Sept. 4.