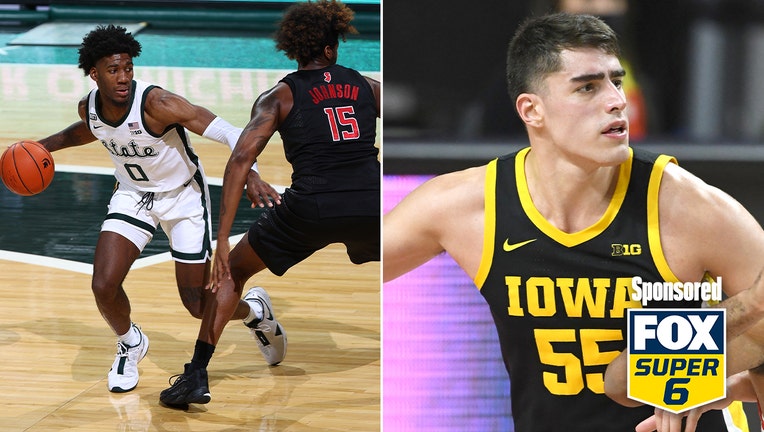 In the crowded field within the best conference in America, they are two of the blue bloods who figure to be hanging around when the Big Ten title is given out in March.

And the clash between Michigan State and Iowa on Thursday night (9 p.m., FS1) in Iowa City could end up winning you the $1,000 grand prize in FOX Super 6 contest.

Predict the right answers to the six questions on this game and you could win $1,000. It’s that simple  Just download the free app to play you could win the grand prize.

Here’s the questions and how to look at it

Which team will score the last point of the first half?
Michigan State or Iowa

One of the best things to keep in mind regarding anything regarding this game is looking to see what team has the best player on the floor. There’s little doubt that Iowa’s Luke Garza, who is a candidate for the national player of the year by almost every organization who hands out that hardware, is that guy in this one. He can dominate a game and he’s big in those statement baskets. That’s what could be an edge for Iowa in this one.

Iowa is averaging 10.58 3-pointers a game thanks to Jordan Bohannon (32 through 12 games), CJ Frederick (23 through 12) and Garza (21 through 12 games). Michigan State has struggled with the three-pointer at times, shooting 34.7 percent from beyond the arc and averaging 7.8 made threes per game.

Michigan State has two scorers who average double figures-  Aaron Henry’s 13.9 points per game and Joey Hauser at 11.8 points per game. Remember that the Spartans are inconsistent in scoring- they were held to 54 against Purdue on Friday night.

Garza is averaging 27.17 points per game this year in 12 games. His high point game is 41 against Southern back on Nov. 27. While there’s no doubt that he will get the bulk of the attention, that doesn’t mean he’s stoppable.

Iowa plays a ton of high scoring games and they enter the contest averaging 91.9 points per game. Michigan State’s average is 76 points a game and they have been playing a lot of grind-it-out defensive totals that involve games in the 60s and low 70s. The way you lean on this questions is likely to lead to the answer to the next one.

Who will win the game?
Michigan State or Iowa

This is a tempo game and it will go a long way to deciding the winner. If Michigan State can’t match up on the outside and it has trouble denying the ball to Garza, then this could be a huge blowout game. And that’s something that the Spartans have been struggling with this year. If it gets into the lower end of the point scale, then Michigan State has a shot.