GREEN BAY -- The Philadelphia Eagles flew into Lambeau Field for a primetime showdown with the 3-0 Green Bay Packers on Thursday night, Sept. 26. After a battle on the gridiron, the Eagles were victorious -- putting the first blemish on the Packers' record this season.  The final score, 34-27 Philadelphia.

The Packers won the toss and deferred. Around 7:20 p.m., the Packers kicked off to the Eagles -- and got this game underway.

After the Eagles failed to score on their first possession, Green Bay running back Jamaal Williams was taken off the field on a stretcher, after taking a helmet-to-helmet hit from Philadelphia defensive end Derek Barnett on the first offensive play of the game for the Packers. 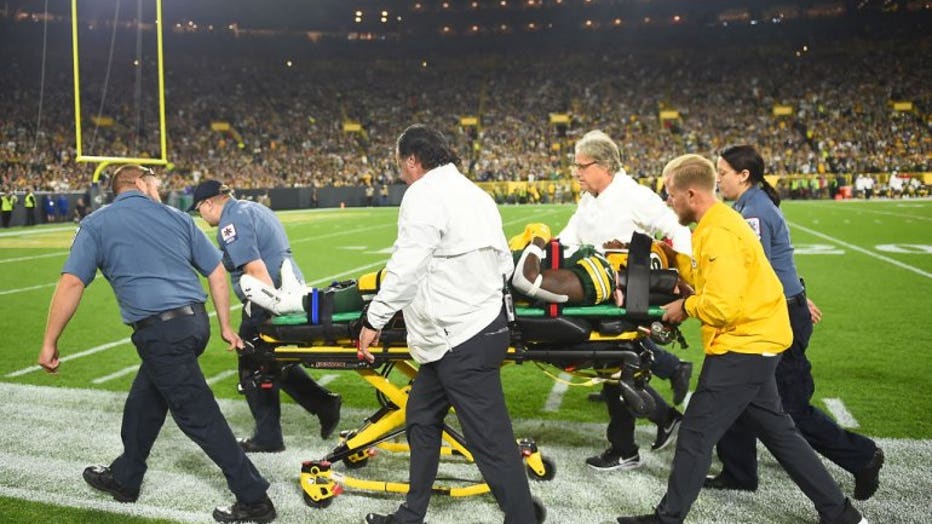 GREEN BAY, WISCONSIN - SEPTEMBER 26: Running back Jamaal Williams #30 of the Green Bay Packers is taken out on a stretcher after helmet-to-helmet hit by the defense of the Philadelphia Eagles during the first quarter of the game at Lambeau Field on S

A short time later, Green Bay struck first. The team capped a 74-yard drive with a 3-yard touchdown run by Aaron Jones. The Packers went up, 7-0, with 10:36 in the first quarter.

On the Packers' second drive, Aaron Rodgers tried multiple times to punch the pigskin into the endzone. But in the end, Green Bay settled for a field goal. Mason Crosby hit from 30 yards out to put the Packers up 10-0 at the beginning of the second quarter.

On the very next drive, the Eagles pounded the ball down the field. Philadelphia quarterback Carson Wentz fired a 6-yard touchdown pass to Alshon Jeffery. That tightened up the score -- Packers still up, 10-7. 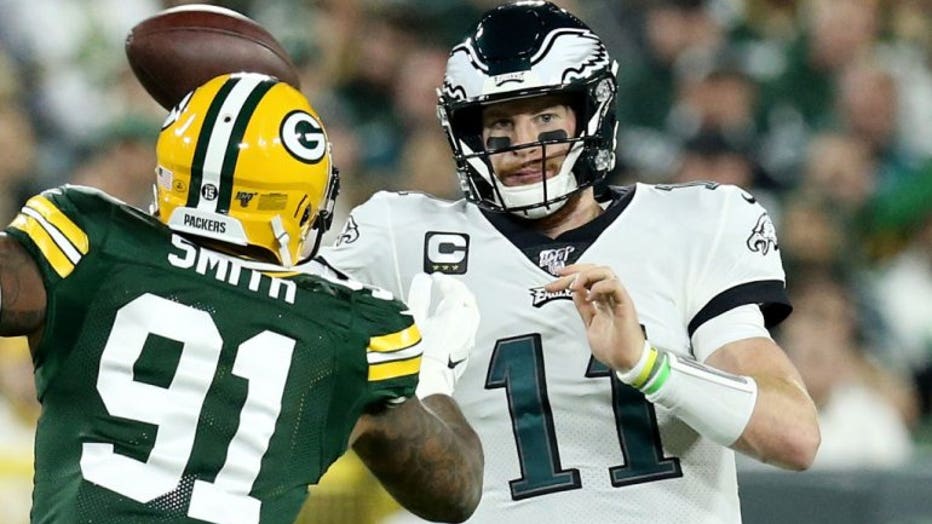 GREEN BAY, WISCONSIN - SEPTEMBER 26: Carson Wentz #11 of the Philadelphia Eagles throws a pass while being pressured by Preston Smith #91 of the Green Bay Packers in the first quarter at Lambeau Field on September 26, 2019 in Green Bay, Wisconsin. (P

With about eight-and-a-half minutes left in the second quarter, Crosby nailed another field goal -- this one from 31 yards -- to stretch the Packers' lead, 13-7.

With a little less than three minutes left in the first half, Carson Wentz punched in another touchdown pass, this time to Dallas Goedert. That put the Eagles up by one, 14-13.

After a Rodgers fumble on the next drive, the Eagles drove down the field quickly -- and scored another touchdown. It was Eagles 21-13 over Green Bay.

But then Green Bay struck back. Rodgers guided the Packers 70 yards down the field in just 50 seconds -- and capped it all off with a 19-yard touchdown pass to Geronimo Allison. The Packers closed the gap -- it was 21-20 Eagles at the half. 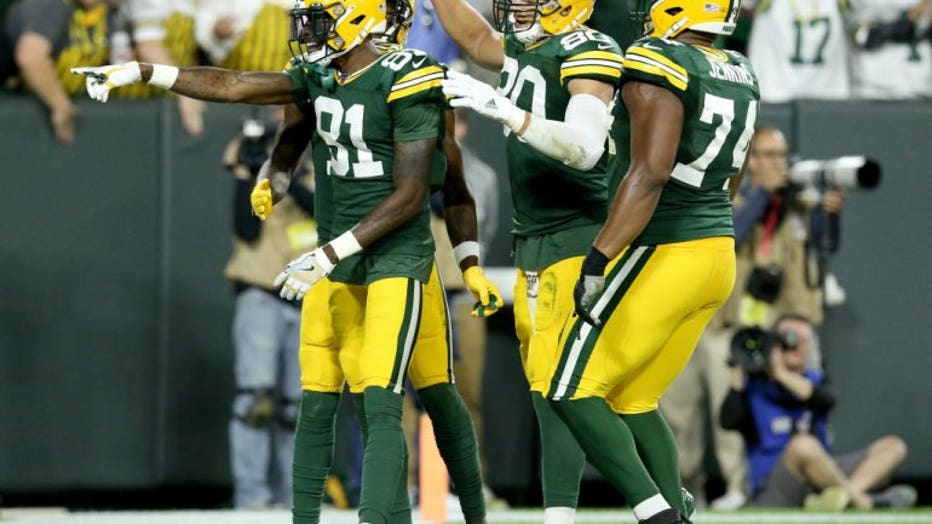 GREEN BAY, WISCONSIN - SEPTEMBER 26: Geronimo Allison #81 of the Green Bay Packers celebrates with teammates after scoring a touchdown in the second quarter against the Philadelphia Eagles at Lambeau Field on September 26, 2019 in Green Bay, Wisconsi

The Packers got the ball first in the second half -- but were unable to capitalize on that possession.

Philadelphia then stormed down the field. Carson Wentz hit for a touchdown pass to Jordan Howard. The Eagles opted to try for a 2-point conversion -- but failed to convert. With 9:12 left in the third quarter, it was Eagles on top, 27-20.

The Packers tied it up late in the third quarter -- when Rodgers hooked up with Jimmy Graham. The 14-yard touchdown pass tied up the score, 27-27.

Philadelphia continued to put the pressure on Green Bay late in the third quarter. Jordan Howard pushed a two-yard run into the endzone, putting the Eagles up once again, 34-27.

The Packers threatened with less than two minutes on the clock. But a deflected pass by Rodgers ended up in the hands of one of the Philadelphia Eagles -- which capped off the game. The Packers fall to 3-1 on the season -- with the 34-27 loss to the Eagles.

Injury update (prior to game)

Green Bay outside linebacker Za'Darius Smith, who was questionable with a knee injury, is active and started against Philadelphia.

Green Bay also will be without starters defensive lineman Montravius Adams and inside linebacker Oren Burks. Adams is sidelined with a shoulder injury, while Burks has yet to make his regular-season debut after partially tearing a pectoral muscle in the preseason opener.

DeSean Jackson will miss his second straight game for the Eagles with an abdominal injury.