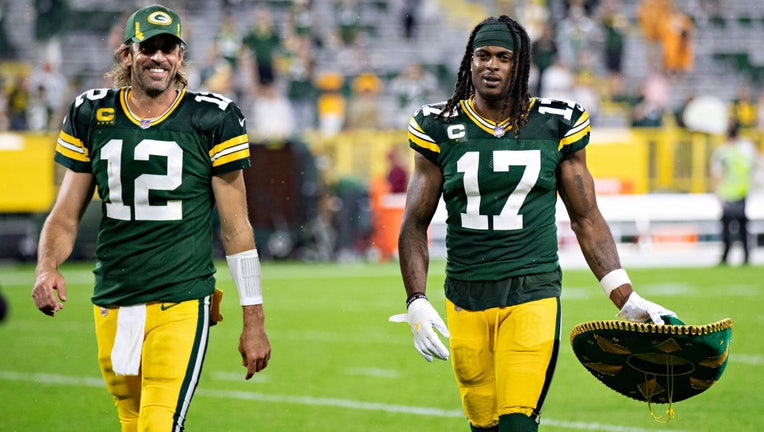 GREEN BAY, WI - SEPTEMBER 20: Aaron Rodgers #12 and Davante Adams #17 of the Green Bay Packers walk off the field together after a game against the Detroit Lions at Lambeau Field on September 20, 2021 in Green Bay, Wisconsin. The Packers defeated the

Gutekunst apparently will get a chance to prove it.

The Packers gave Adams a franchise tag Tuesday on the same day Rodgers announced he plans to return to the Packers for an 18th season rather than requesting a trade or retiring. That addressed the Packers’ two biggest roster issues.

But there still are plenty of questions surrounding a team nearly $46 million over the salary cap, according to overthecap.com, with the free agency period starting next week. Gutekunst said before the NFL scouting combine that he was "very confident" the Packers could assemble a competitive team while paying big money to Rodgers and Adams.

"There’s always challenges," Gutekunst said at the time. "But having good players here, you work around that. I think having those guys here certainly makes us a very good football team."

The Packers are eager to earn their first Super Bowl berth since their 2010 championship season. And that means paying big money to their best players.

Rodgers noted he hasn't signed anything yet and disputed an NFL Network report he had agreed to a four-year, $200 million contract with $153 million in guaranteed money. Adams will make just over $20 million this season if the Packers don’t work out a long-term deal with him by July 15.

Adams received a non-exclusive franchise tag and still can negotiate with other teams, but the Packers could match any offer. If the Packers didn’t match, they would receive two first-round draft picks.

So the Packers likely will keep together one of the NFL’s top pass-catch combinations. Rodgers is the two-time reigning MVP. Adams has earned All-Pro honors the last two seasons and has the most catches and touchdown receptions since 2016 of any NFL player.

The questions center on Rodgers’ other targets.

The Packers could address this position in the draft, though they haven’t selected a receiver in the first round since taking Javon Walker at No. 20 overall in 2002.

On defense, the Packers could have a tough time keeping All-Pro linebacker De’Vondre Campbell and cornerback Rasul Douglas, who are entering free agency after producing breakthrough seasons on bargain deals. The Packers also could face a tough decision with veteran outside linebacker Za’Darius Smith, who has a cap hit of nearly $27.7 million.

The Packers thus far have addressed their salary-cap issues by restructuring contracts of veterans to reduce their cap hits. That will lead to future challenges and Gutekunst has acknowledged the balancing act of addressing current cap concerns without making things untenable years down the road.

"I do think we recognize what kind of football team we have and the opportunities in front of us, but I think you’re always kind of making sure you can field a competitive team year in and year out," Gutekunst said at the combine. "You’ve got to be mindful of what we’re doing in the future, even though sometimes right now feels like all that matters."

For now, the Packers want to make sure they have a contending team as long as they still have a Hall of Fame quarterback playing at an MVP level.

The Packers owned the NFC’s top seed each of the last two seasons but came up short in the playoffs. Now that Rodgers is back in the fold, they want to do everything possible to get him back to the Super Bowl.

"We’re disappointed that we didn’t finish it off the last two years," Gutekunst said before the combine. "But there’s no reason to think we can’t get right back there and knock on the door and get there."

Aaron Rodgers was the talk of the town after he confirmed he would be back the Green Bay Packers. The quarterback got people in Milwaukee talking.