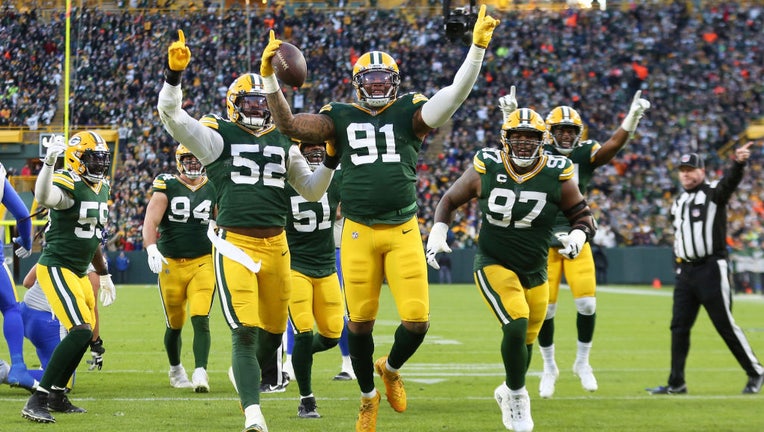 GREEN BAY, WI - NOVEMBER 28: Green Bay Packers outside linebacker Preston Smith (91) celebrates a fumble recovery during a game between the Green Bay Packers and the Los Angeles Rams at Lambeau Field on November 28, 2021 in Green Bay, WI. (Photo by L

GREEN BAY, Wis. - The NFC North-leading Green Bay Packers would love to showcase how good they can be when all their top players are available and healthy. Whether they’ll actually get that opportunity remains uncertain.

Green Bay (9-3) enters its long-awaited bye week with a 3½-game lead in its division and trailing only the Arizona Cardinals (9-2) in the race for the NFC’s top seed. The Packers would own the tiebreaker advantage because they won 24-21 at Arizona on Oct. 28.

They’re hoping this week off gives their long list of injured players a chance to recover.

"I was talking to (linebacker) De’Vondre Campbell right before I came in here and he was like, ‘We just played 12 games straight. That’s like playing a whole college football season without one bye.’" running back A.J. Dillon said after a 36-28 victory over the Los Angeles Rams on Sunday. "So I think a lot of people could use the rest and time to refresh and come back and be refueled and recharged."

The Packers aren’t far off the pace they established each of the past two seasons, when they went 13-3 and won division titles before losing in the NFC championship game. They’ve done that without having many of their most notable players.

David Bakhtiari, a 2020 All-Pro left tackle, hasn’t played since tearing the anterior cruciate ligament in his left knee on Dec. 31. Outside linebacker and 2020 Pro Bowl selection Za’Darius Smith has been out since the season opener because of back trouble. Cornerback Jaire Alexander injured his right shoulder on Oct. 3 and hasn’t played since.

"We’ve had so many guys step up, though, in their stead — guys we expected to play well and guys we didn’t expect to maybe not play a whole lot or even be a part of the football team," quarterback Aaron Rodgers said. "Really proud of those guys and their efforts."

Rodgers says he fractured a pinky toe while working out at home during his quarantine after testing positive for COVID-19. The injury caused him to practice just once over the past two weeks, but it hasn’t impacted his production.

The reigning MVP threw for 307 yards with two touchdown passes and one touchdown run against the Rams, though coach Matt LaFleur noted that "he certainly was limping around a little bit, especially in the fourth quarter."

That followed a 385-yard, four-touchdown performance in a 34-31 loss at Minnesota.

"I think he’s one of the toughest competitors that I’ve ever been around," LaFleur said.

Green Bay’s defense bounced back from a poor performance at Minnesota and forced three turnovers that led to 16 points. ... After totaling 13 first-half points in the three games leading up to this one, the Packers had 20 by halftime Sunday. ... Mason Crosby went 3 of 4 on field-goal attempts. He had missed eight of his past 14 heading into the game.

The Packers gained just 2.9 yards per carry. Their longest run from scrimmage was 8 yards. RB Aaron Jones played after missing just one game because of a sprained medial collateral ligament, but he was limited to 23 yards on 10 carries. ... The Packers allowed two long touchdown passes — a 79-yarder to Van Jefferson and a 54-yarder to Odell Beckham Jr.

CB Rasul Douglas scored on a 33-yard interception return and had four passes defended. ... OLB Rashan Gary set up the game’s first touchdown by forcing a fumble on a sack to give the Packers first-and-goal at the 6. Gary, who was unavailable for the loss at Minnesota because of an elbow injury, has five sacks over his past five games. ... DT Kenny Clark had six tackles and a sack. ... WR Davante Adams has 15 catches for 219 yards over his past two games.

DB Chandon Sullivan fell as Jefferson caught a pass at about the Green Bay 34, giving the receiver a clear path to the end zone on his 79-yard touchdown.

WR Randall Cobb didn’t play in the second half because of a groin injury. He had four catches for 95 yards and a touchdown in the first half.

84: Rodgers’ 54-yard pass to Cobb in the second quarter gave him 84 completions of at least 50 yards. According to the Elias Sports Bureau, that’s the second-highest total over the past 45 seasons, behind only Drew Brees’ 90.

The Packers have three of their last five games at home, starting with a Dec. 12 matchup against the Chicago Bears.

The Miami Marlins reached an agreement with free-agent outfielder Avisail Garcia, a person with knowledge of the situations said Sunday.