Wisconsin Timber Rattlers' Manager Matt Erickson is one of the longtime faces in the Milwaukee Brewers' organization. Erickson is lending a helping hand at spring training while&nbsp;also prepping for a season down on the farm at Fox Cities Stadium.

PHOENIX - Wisconsin Timber Rattlers' Manager Matt Erickson is one of the longtime faces in the Milwaukee Brewers' organization. Erickson is lending a helping hand at spring training while also prepping for a season down on the farm at Fox Cities Stadium.

"There's definitely some sense of normalcy," said Erickson of spring training in Arizona. "It's great to see the guys. There's a lot of energy right here. Right now, people are excited to get back to their normal preparation of spring training, and we're looking forward to a full scheduled season with fans in the stands -- and that's what everybody wants."

Erickson joins the Brewers every year in phoenix to help the ballclub get ready for the regular season, and this spring training, he's part of a team of coaches giving Keston Hiura a crash course at first base. 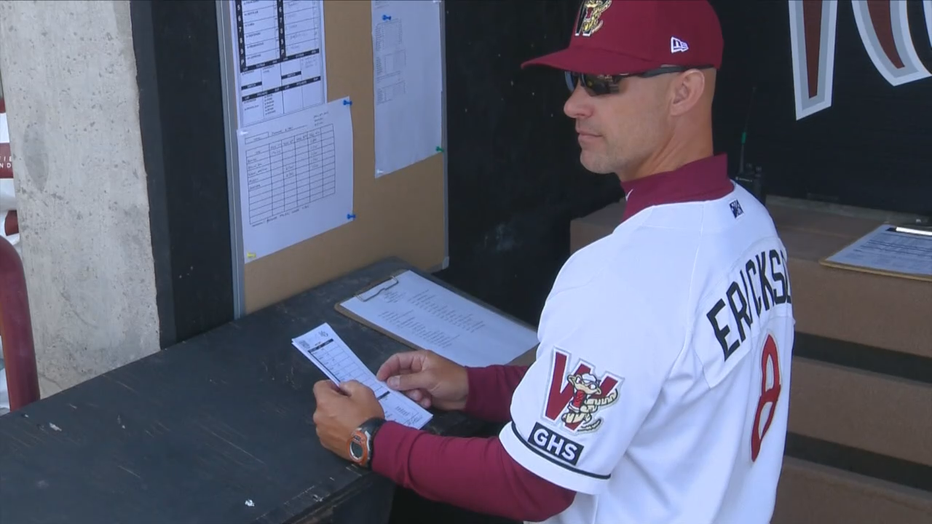 "It's fun. You know, that's why we're here, and that's what we get to do is to help teach," said Erickson. "You know, Keston, since the first day I met him in Appleton when he was a Timber Rattler briefly, very receptive to information and obviously is able to take that information and apply it to his own skills."

FOX6's Lily Zhao: "Well, I know the prototype of a traditional first baseman, in a sense, is just a taller guy, is a bigger guy. I know Keston's about 6 feet, so do you think that that's been kind of overblown that you have to be a bigger guy at first base to excel at that position?"

"If you come and look at our potential infield here right now, 6 feet is pretty tall right now," said Erickson. "We've got some short guys. Yes, I mean, I suppose traditionally, I think Keston, as he learns the position, as he gets comfortable, as he becomes more patient seeing the baseball instead of going out to get it, he'll be able to cover the first base bag really well."

Erickson's role in development extends from the big leagues to the minor leagues, and in a few weeks, he'll head back to Appleton where the Wisconsin Timber Rattlers will once again be the Brewers' alternate training site. Erickson helped run that site last year.

"I thought it went very well," said Erickson. "That's something that we've never done before. It was a very unique experience."

The seats that were empty at Fox Cities Stadium for over a year and a half will fill up again soon because the Timber Rattlers are back this summer.

"Thank goodness," said Erickson. "Starting early May with fans in the stands -- that's what we're all pushing for, and that's what everybody wants. I miss that atmosphere, for sure."

Just getting to play and develop these prospects is what matters most.

"We were in a situation last year where something was taken away from us that maybe we took for granted, and we realized how much we missed it, and now, we're getting a chance to be back here and everybody has a lot of energy bouncing around, so it's been fun so far," said Erickson.