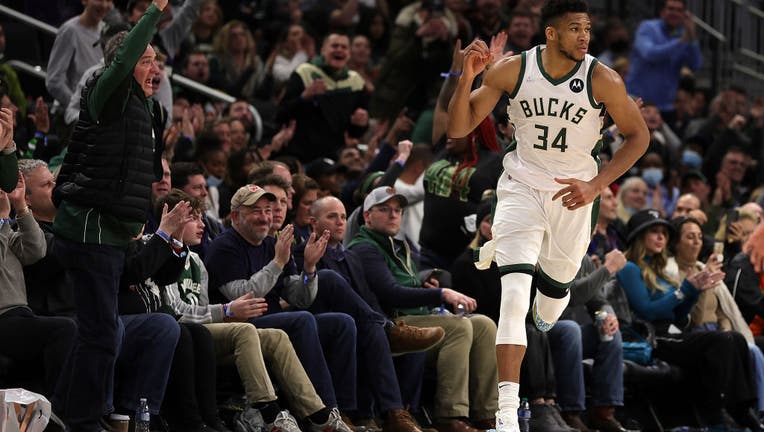 MILWAUKEE, WISCONSIN - FEBRUARY 15: Giannis Antetokounmpo #34 of the Milwaukee Bucks reacts to a three point shot during the second half of a game against the Indiana Pacers at Fiserv Forum on February 15, 2022 in Milwaukee, Wisconsin. NOTE TO USER:

MILWAUKEE - Giannis Antetokounmpo scored a season-high 50 points, two off his career best, and pulled down 14 rebounds to lead the Milwaukee Bucks past the skidding Indiana Pacers 128-119 on Tuesday night.

The Bucks (36-23) swept the four-game season series from the Pacers and have won eight straight against their Central Division foe.

Antetokounmpo, who didn’t play in Milwaukee’s loss to Portland on Monday night because of a sore left ankle, showed no ill effects as he racked up 12 first-quarter points that included a pair of thunderous dunks and a 3-pointer.

Antetokounmpo set a career high with his seventh 40-point game of the season and scored 50 for the first time since the memorable title-clinching game in the NBA Finals last season, which gave the Bucks their first championship in 50 years.

Both teams had only 10 players available due to injuries.

Buddy Hield scored a season-high 36 points and Tyrese Haliburton had 17 points and eight assists for Indiana.

The Bucks led 34-27 after the first quarter before the Pacers grabbed a short-lived lead midway through the second. A pair of 3-pointers by reserve guard Lindell Wigginton sparked a 12-2 surge that grew the lead to double digits. Milwaukee led 69-63 at halftime, paced by Antetokounmpo’s 18 points.

Milwaukee built a pair of nine-point leads in the third but couldn’t shake the Pacers. When Indiana got close again in the fourth, Antetokounmpo swished a 3-pointer and added a pair of free throws after a clear-path foul and Milwaukee eventually increased its lead to 14 before holding off the Pacers down the stretch.

After being banished during the pandemic, some stores are now begging customers to bring their own reusable cups for coffee.