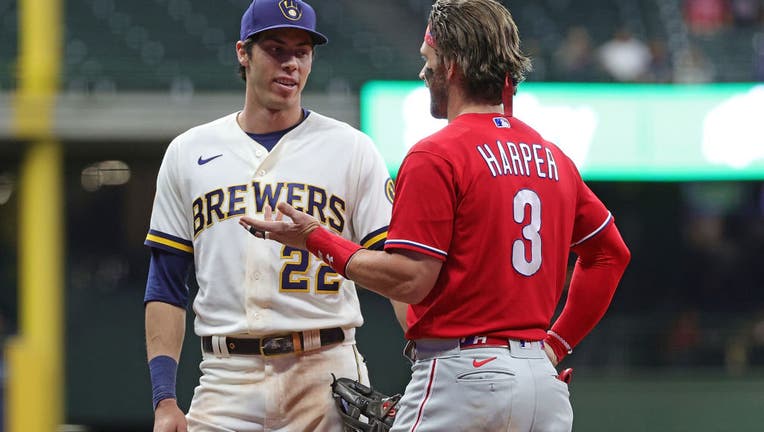 MILWAUKEE, WISCONSIN - SEPTEMBER 08: Christian Yelich #22 of the Milwaukee Brewers speaks with Bryce Harper #3 of the Philadelphia Phillies during the eighth inning at American Family Field on September 08, 2021 in Milwaukee, Wisconsin. (Photo by Sta

MILWAUKEE - Eduardo Escobar hit a tiebreaking solo homer in the sixth inning, and the Milwaukee Brewers topped the Philadelphia Phillies 4-3 on Wednesday night.

Milwaukee, which won the final two games of the series after dropping the opener, extended its lead to 12 games in the NL Central over Cincinnati, which lost 4-1 to the Chicago Cubs.

"At this point, it’s stacking up wins and if teams behind us lose, it gets tough on them, for sure," Brewers manager Craig Counsell said. "We know it’s in our hands right now. You work this hard to build this lead and it’s in our hands. So that’s how you see it. Take care of our business, and we’ve earned that."

Escobar drove an 0-1 pitch from Connor Brogdon (5-4) deep to right for his 25th homer. The infielder was acquired in a July trade with Arizona.

"It had been a long time since I homered, but I still fight every at-bat, come every day to the ballpark and work really hard," Escobar said.

Milwaukee’s bullpen covered 5 1/3 scoreless innings in relief of Freddy Peralta. Alan Ashby (2-0) got six outs and Brad Boxberger pitched a perfect seventh. Devin Williams worked the eighth before Josh Hader closed it out for his 30th save in 31 opportunities.

Bryce Harper hit his 29th homer for Philadelphia in the first, but Milwaukee responded with two runs in the bottom half.

The Brewers made it 3-1 in the second when Peralta singled, moved to third on Wong’s double and scored on Christian Yelich’s infield hit.

Philadelphia tied it with two unearned runs in third. The Phillies loaded the bases on singles by Travis Jankowski and Odubel Herrera around an error on Gibson’s attempted sacrifice bunt. Harper walked to force in a run and J.T. Realmuto followed with an RBI fielder’s choice.

"This is one of those games, yeah, it would be great to have, but that’s a really good team over there and more than likely the team that we’re going to see in October when we get there," Gibson said. "So, to play them pretty tight, to have multiple chances there in the last two innings against their best guys, you really can’t ask for anything else."

It was the second consecutive abbreviated start for Peralta since a stint on the 10-day injured list with right shoulder inflammation. He allowed three runs, one earned, and four hits in 3 2/3 innings.

"I don’t think he’s locked in, but I think he’s healthy. I don’t think there’s any question about that," Counsell said. "I thought the velocity was outstanding today. I think we’ve just got to keep getting him out there on regular turn."

Phillies: RHP Zach Eflin is scheduled to undergo surgery Friday in Philadelphia to repair his right patellar tendon. His expected recovery time is six to eight months. He has been transferred to the 60-day injured list.

Brewers: SS Willy Adames hit in the cage for the first time since going on the 10-day injured list on Sunday with a left quad strain.

One person is dead and two others are seriously injured after a crash near Interstate 94 and 70th Street.