The Philadelphia Eagles will host the New York Giants Thursday night in an NFC East clash airing live on FOX.

PHILADELPHIA - Thursday marks the beginning of Week 7 in the NFL and so far, the NFC East hasn’t had much to cheer about.

The first-place Dallas Cowboys are a mere 2-4 while the rest of the division remains hot on their trail with just a single win apiece.

Even so, the Philadelphia Eagles and New York Giants have a chance to match records with “America’s Team” in Thursday night’s game on FOX.

Despite Philadelphia, New York and Washington all having one win each, the Eagles sit in sole position of second place since their Week 3 tie with the Cincinnati Bengals left them with a higher winning percentage than their division counterparts. 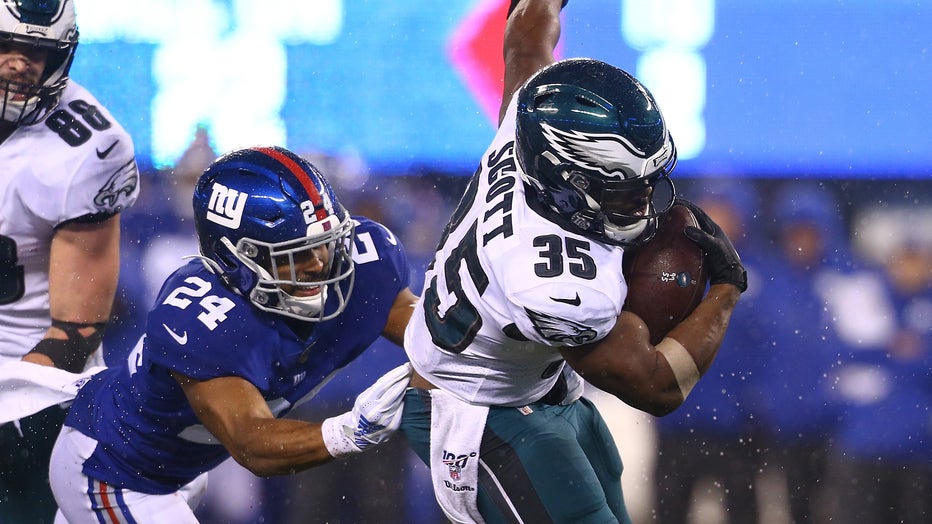 Boston Scott, No. 35 of the Philadelphia Eagles in, action against the New York Giants at MetLife Stadium on Dec. 29, 2019 in East Rutherford, New Jersey. (Photo by Mike Stobe/Getty Images)

A win Thursday would thrust either team into first place, but that could change with the outcome of the Cowboys’ game against Washington on Sunday.

“Everything is still kind of up for grabs and we’re just trying to figure out how to win a game and how to get guys healthy to play," Eagles coach Doug Pederson told the Associated Press.

Fresh off their first win of the season, the Giants are hoping to establish some momentum to propel them through the rest of the season.

This station is owned by the Fox Corporation. This story was reported from Atlanta.