Miraculously, six weeks after surgery, Dominican High School's Teddy Wong was back on the court and playing in an organized tennis tournament.

WHITEFISH BAY, Wis. - Teddy Wong is a force on the tennis court.

"After my freshman year, after my success at the state tournament, I really was like wow I think I can take this to the next level," said Teddy Wong, Dominican junior.

The 17-year-old junior is Dominican’s top singles tennis player, and Teddy’s worked hard to get to this point.

However, for the last few years, life was always serving him a shot he couldn’t quite send back.

Unfortunately, it wasn’t that simple. Everything changed his sophomore year.

From there, Teddy saw multiple doctors who had few answers.

He was eventually put on medication to help with the seizures.

"I had an EEG where they attach wires to your head for 20 minutes to see brain movement," said Wong.

A second EEG and an MRI confirmed what no teenager wanted to hear.

"They found a mass inside of my brain," said Wong.

Teddy had a benign tumor on the right side of his brain, but it wasn’t just any tumor. 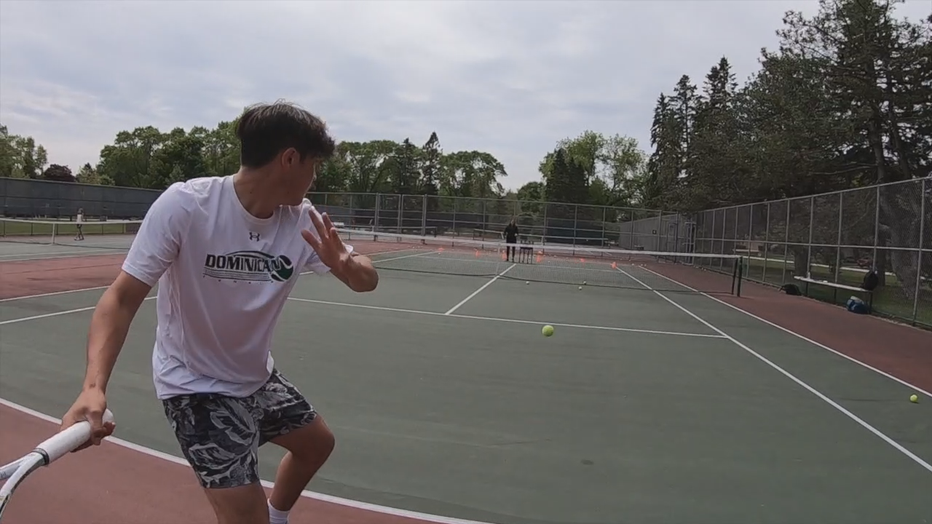 He’s just 1 of 20 young adults in the world to have what’s known as Polymorphous low-grade neuroepithelial tumor of the young or a PLNTY brain tumor.

"I was scared," said Wong. "I didn’t know what to think to be honest."

Surgery was required to remove the mass, which would rid him of the seizures for good. However, Teddy had to turn 16 first to get the surgery.

On his birthday last May, Teddy’s friends and family gave him a socially distanced birthday sendoff in preparation of the big surgery.

The tumor was removed the day following his birthday, but soon after, bleeding was found in his brain. A second surgery had to be done.

"It was very scary to me," said Wong.

At the time, the tenacious tennis player had one thing on his mind.

"I just wanted to keep playing sports," said Wong. "That’s just like my main thing, sports, so if I wasn’t able to play that, I really don’t know what I would be able to do."

Miraculously, that’s what Teddy would do. Six weeks after the surgery, he was back on the court and playing in an organized tennis tournament, which later admits probably wasn’t the best idea.

"I was still like out of shape, and I knew I shouldn’t have played," said Wong. "I just wasn’t ready yet."

But there’s a reason he did it.

A year later, Teddy’s recovered well, with the only visible remind this scar on his head.

"I think it’s still pretty cool that I had major surgery but I’m still back to my level of play," said Wong.

So far, Wong has won conference as a junior and made First Team All-Conference. The cherry on top? He’s also qualified for the individual state tournament. A strong list of accomplishments for a teen who has already won the match of a lifetime.