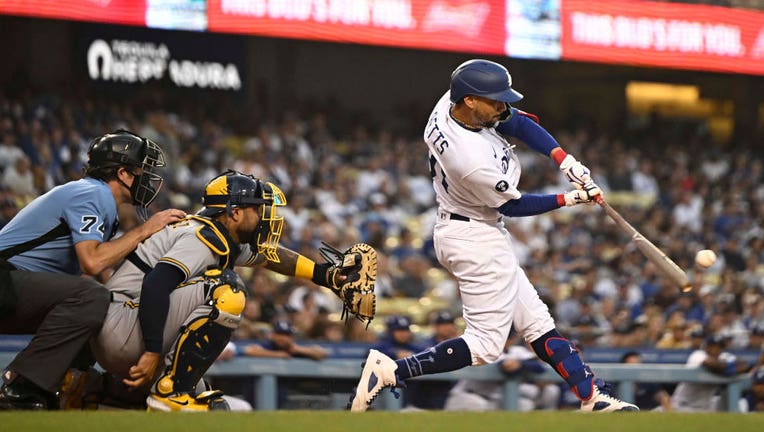 Los Angeles, CA - August 23: Mookie Betts #50 of the Los Angeles Dodgers doubles against the Milwaukee Brewers in the first inning of a MLB baseball game at Dodger Stadium in Los Angeles on Tuesday, August 23, 2022. (Photo by Keith Birmingham/MediaNe

Trayce Thompson blasted a three-run homer in the second and drove in another run as part of a 2-for-3 performance. Freddie Freeman went 3 for 5 with four RBIs in helping the Dodgers bounce back after being shut out at home for the first time this season in a 4-0 loss in the series opener Monday.

"We were aggressive early in counts," Freeman said. "That was our plan today: Attack and attack early."

"It felt like a Friday or Saturday ballgame at school," Gonsolin said. "It was really cool to go out there and have him toe the mound on the other side of the ball."

Gonsolin allowed one run and three hits, struck out three and walked two.

"It was a weird day for me," he said. "I didn't feel like I had my best stuff, so I really tip the cap to the defense. All the position guys did a fantastic job defensively and offensively, obviously."

Burnes (9-6) got tagged for a season-high seven runs and six hits in 3 2/3 innings, equaling his shortest outing of the season. The right-hander struck out a season-low three and walked three.

"Scoring 10 runs in a game started by Corbin Burnes and Sandy, it's a little unexpected even for us," Freeman said. "Ten runs is a lot. Those guys are really good pitchers."

Burnes walked Joey Gallo and Cody Bellinger to set up Thompson's 423-foot shot to the left-field pavilion with two outs, extending the lead to 4-0.

The Dodgers struck again with two outs in the fourth when they sent eight batters to the plate and tacked on three runs. Thompson and Trea Turner had RBI singles to chase Burnes. He was replaced by Brent Suter, who gave up Freeman's RBI single that made it 7-0.

Freeman’s RBI single gave the Dodgers a 1-0 lead in the first. He leads the majors with 156 hits this season.

Milwaukee's only run came on Jonathan Davis' RBI single in the fifth.