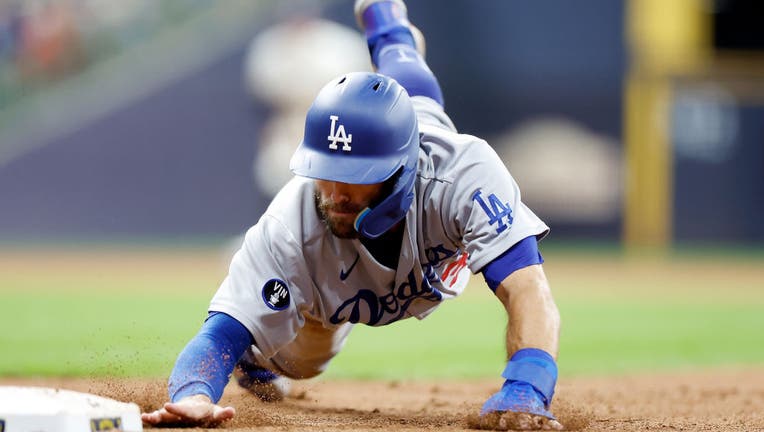 MILWAUKEE, WISCONSIN - AUGUST 15: Chris Taylor #3 of the Los Angeles Dodgers dives back to first base in the eighth inning against the Milwaukee Brewers at American Family Field on August 15, 2022 in Milwaukee, Wisconsin. (Photo by John Fisher/Getty

MILWAUKEE - Julio Urías continued his career-long pattern of shutting down lineups after the All-Star break.

The NL West-leading Los Angeles Dodgers hope he can stay hot all the way through the postseason.

Freddie Freeman and Gavin Lux homered to back Urías’ five solid innings, and the Dodgers blanked the Milwaukee Brewers 4-0 on Monday night. Urías (13-6) is 10-0 with a 1.99 ERA over his last 11 starts.

Urías has a career 1.87 ERA after the All-Star break, the lowest in major league history by anyone who has pitched at least 180 innings after the Midsummer Classic.

He came through again for the Dodgers on a day when they announced two-time All-Star right-hander Walker Buehler will have season-ending elbow surgery. Buehler's injury had prevented him from pitching for the last two months.

"We know how tough of a loss it is, especially losing Walker," Urías said through a translator. "But we have a good rotation. We know what we're capable of doing."

A day after their 12-game winning streak ended with a 4-0 loss at Kansas City, the major league-best Dodgers got back on track, improving to 20-4 since the All-Star break.

Freeman hit a solo shot in the first inning off Freddy Peralta (4-3) and Lux added a two-run blast against Hoby Milner in the sixth.

Urías worked out of trouble in the first three innings. He finished with six strikeouts while allowing four hits and two walks, improving to 10-0 with a 1.99 ERA over his last 11 starts.

The Brewers got the leadoff man on base in each of the first three innings against Urías. But they went 0 for 9 with runners in scoring position and were hitless after Rowdy Tellez's one-out single in the fourth.

"I feel like if we attack first we break that momentum on him," Brewers shortstop Willy Adames said. "But we didn’t do that and he got comfortable."

Milwaukee even struck out four times against reliever Chris Martin in the sixth inning.

Andrew McCutchen whiffed to start the inning but reached on a third-strike passed ball and advanced to second on a wild pitch. Martin then struck out Kolten Wong, Hunter Renfroe and Tellez.

Freeman's homer was his 16th this season. He also doubled in the seventh.

Peralta allowed one run but lasted just four innings. He got out of a bases-loaded jam in the fourth by striking out Cody Bellinger with his 92nd and final pitch.

The Dodgers added an unearned run in the fifth before Lux’s drive to left in the sixth made it 4-0. Lux, who grew up about 40 miles south of Milwaukee in Kenosha, said he had 30 to 35 friends and relatives at the game.

Dodgers: RHP Dustin May is scheduled to return from Tommy John surgery and make his season debut on Saturday against the Miami Marlins.

Brewers: C Omar Narváez is expected to return for the weekend series with the Chicago Cubs. Narváez hasn’t played since Aug. 3 due to a left quadriceps injury. ... RHP Trevor Rosenthal will make a rehabilitation assignment with Triple-A Nashville on Tuesday. Rosenthal, acquired from the San Francisco Giants at the trade deadline, hasn’t pitched since 2020 due to a variety of injuries.

The Dodgers reinstated C Austin Barnes after he missed three games while on the family emergency list. They designated catcher Tony Wolters for assignment.

Ryan Pepiot (1-0, 3.92 ERA) starts for the Dodgers and Brandon Woodruff (9-3, 3.52) pitches for the Brewers as this four-game series continues Tuesday with a matchup of right-handers.