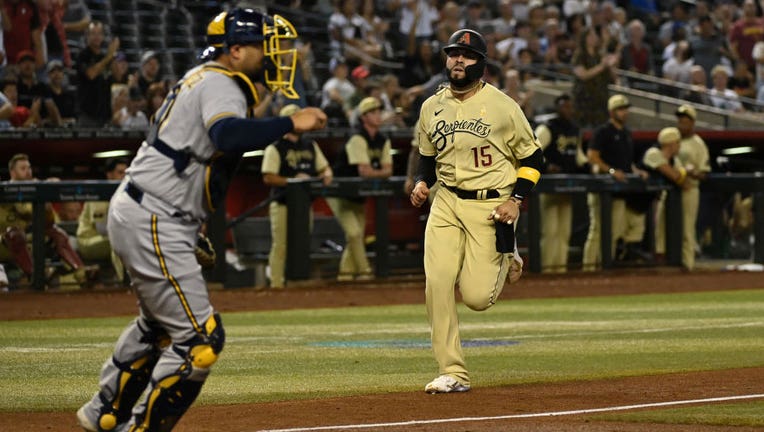 PHOENIX, ARIZONA - SEPTEMBER 02: Emmanuel Rivera #15 of the Arizona Diamondbacks scores on a single hit by teammate Jake McCarthy #30 against the Milwaukee Brewers during the fifth inning at Chase Field on September 02, 2022 in Phoenix, Arizona. All

"He's come in and slugged right away," D-backs third baseman Josh Rojas said of Rivera. "That was a great addition to this team. That was something we needed — we needed another power bat in the lineup."

Milwaukee — which has dropped three of four games — fell to 7 1/2 games behind the division-leading St. Louis Cardinals in the NL Central.

The D-backs have won seven of their past eight games. They’ve done their damage against the White Sox, Phillies and Brewers, which are all teams fighting for a playoff spot.

"It’s been a challenging test and I think we’re passing, we’re doing a good job," D-backs manager Torey Lovullo said. "We’re a good baseball team when we do things like we know how to do them."

Rivera had an RBI double in the fifth and added two singles. The 26-year-old struggled to find a consistent role with the Royals but immediately became a key cog in the middle of the D-backs’ order since the trade.

The Brewers took a 1-0 lead in the fifth when Andrew McCutchen walked with the bases loaded, forcing home Willy Adames. It was the third straight walk from D-backs reliever Kyle Nelson.

But the D-backs recovered quickly in the bottom of the fifth, tying the game on back-to-back doubles by Christian Walker and Rivera. McCarthy brought Rivera home with a single to give Arizona a 2-1 advantage.

The Brewers left 11 runners on base.

"Today was a strange game," Brewers manager Craig Counsell said. "We got a bunch of base hits, bunch of singles, but didn't really have a ton of guys in scoring position."

Arizona's bullpen threw 4 1/3 scoreless innings. Ian Kennedy worked the ninth for his 10th save in 14 opportunities.

D-backs right-hander Zach Davies was effective, but needed 91 pitches to navigate 4 2/3 innings. He gave up one earned run on six hits and a walk while striking out five.

Brewers left-handed starter Eric Lauer (10-6) gave up two runs on six hits over 6 2/3 innings, striking out five. Kyle Nelson (2-0) got the win for the D-backs.

It was the first time Davies and Lauer met on the mound since they were traded for each other in a Brewers-Padres swap in 2019.