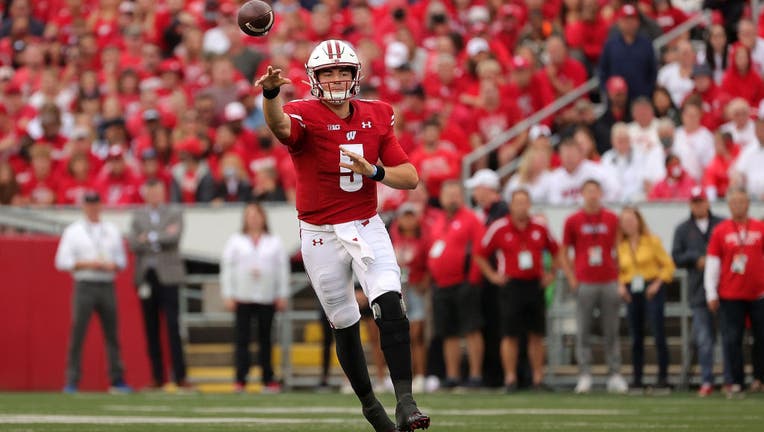 MADISON, WISCONSIN - SEPTEMBER 04: Graham Mertz #5 of the Wisconsin Badgers looks to pass during the first half against the Penn State Nittany Lions at Camp Randall Stadium on September 04, 2021 in Madison, Wisconsin. (Photo by Stacy Revere/Getty Ima

Wisconsin (0-1) had its string of 25 consecutive victories in home openers snapped because of its red-zone failures. The Badgers dominated time of possession but had four scoreless trips inside Penn State’s 25-yard line, including three inside the 10.

The Badgers had first-and-goal at the 1 in the closing minutes on a drive that included a targeting penalty on Ellis Brooks that knocked Penn State’s top tackler out of the game.

Mertz lost the ball on an apparent handoff attempt on first down, though Wisconsin’s Isaac Guerendo recovered the fumble at the 4. Guerendo lost a yard on second down, then Joey Porter Jr. broke up a pass to Jack Dunn.

On fourth down, Mertz attempted a pass across the middle to tight end Jake Ferguson, but Brisker picked it off and delivered a 41-yard return with 2:16 remaining.

Wisconsin got the ball back on its own 18 with 1:11 left and got all the way to the Penn State 25 with 26 seconds remaining, thanks in part to a personal foul on Arnold Ebiketie. But after an intentional grounding call pushed Wisconsin back to the 32, Brown intercepted a Mertz pass on the game’s final play.

Noah Cain broke a 10-all tie and put Penn State (1-0) ahead for good with a 2-yard touchdown run with 9:17 remaining, though Jonathan Stout’s extra-point attempt bounced off the left upright. Stout also missed a 23-yard field goal.

Jahan Dotson had a 49-yard touchdown catch for Penn State and also set up Cain’s score with a 42-yard reception. He finished with five catches for 102 yards.

Wisconsin was led by Chez Mellusi, who rushed for 121 yards and a touchdown on 31 carries in his Badgers debut. Mellusi had just 27 carries all season last year while playing for Clemson.

Wisconsin played without one of its usual starting inside linebackers. Leo Chenal, whose 46 tackles ranked second on the team last season, announced on Instagram he would miss the first two games after testing positive for COVID-19.

The Badgers canceled two games last season due to an outbreak.

Mike Maskalunas, a sixth-year senior, made his first career start in Chenal's place.

Penn State: The Nittany Lions managed only one first down and gained just 43 yards in the first half but still managed to win by opening up its passing attack in the second half and coming up huge on defense in critical moments. Ebiketie, a Temple transfer, blocked a short field-goal attempt and provided consistent pressure in his Penn State debut. Brisker left the game due to injury on multiple occasions but delivered one of the game's biggest plays down the stretch.

Wisconsin figures to fall out of the top 15 while Penn State could move up to the top 15.