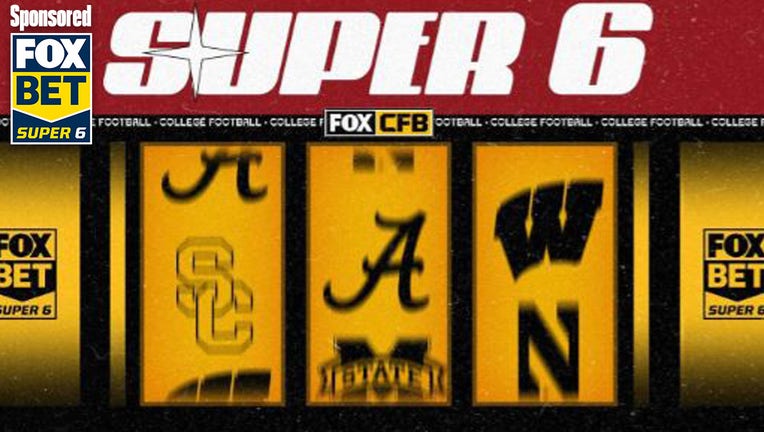 Ready for your free chance to win $25,000? Find out how you can cash in on college football playing FOX Bet Super 6! (FOX Sports)

College football Week 2 is here! And what better way to get in on the football fun than to play FOX Bet Super 6?

There is no better way.

If you're asking what FOX Bet Super 6 is, we've got you covered. FOX Bet Super 6 is a free-to-play contest where you pick the winners of all six marquee games with their margins of victory for a chance to win $25,000. All you have to do is download the FOX Super 6 app on your phone or mobile device. Seriously, that's all it takes.

Oh, did we mention it's free?

Now, we are very proud that FOX is Football, but sometimes we need a little help from our friends when it comes to mapping out Xs and Os — especially when there's $25,000 worth of prize money at stake. So we've got you covered there, too.

Below, you'll find our picks for college football's Week 2 six marquee games. Read what we think about each, go to your FOX Bet Super 6 app to make your picks and then watch all these matchups to see if you're our next winner. Sweet?

If there's anything we can rely on in this life, it's death, taxes and Alabama steamrolling opponents early in the year. The Tide trampled all over Utah State in their season opener, which squashed the hopes of bettors who had backed the Aggies to win it all. Sure, it's fun to fantasize about how betting $1000 on the Aggies +100000 could've turned into $1 million dollars, but let's be real. Utah State never really stood a chance against Bama or the field.

And in Week 2, Texas doesn't stand a chance against Alabama. So picking Alabama to win was the easy part. What becomes a little more challenging is picking by how many points. Alabama could certainly post another shut-out. However, it's more likely that Longhorn coach Steve Sarkisian — a Saban disciple — will have his team positioned to put up some points in this contest.

Prediction
Alabama by 28 to 35 points

Northwestern not only covered the spread in its season opener against Nebraska, but the Wildcats got the 31-28 straight-up win over the Cornhuskers in the duel that went down in Dublin.

In Week 2, the Wildcats host the Blue Devils, and we're calling Cats to come out on top. Yes, Duke's defense held Temple to only 179 yards in Week 1 as they trounced the Owls 30-0. But Northwestern will be a more formidable offensive foe. Against Nebraska, Northwestern quarterback Ryan Hilinski threw for 314 yards, two touchdowns and no interceptions. In Week 2, look for Hilinski to lead this Wildcat offense with even more impressive numbers and a bigger win.

The Cougars travel to the Midwest to take on the Badgers Saturday afternoon. And to be frank, both these squads in Week 1 faced weak competition, so Week 2 will show us what Washington State and Wisconsin are made of.

On the Badgers side are quarterback Graham Mertz and running back Braelon Allen. Mertz didn't have the most impressive season last year, averaging about 151 passing yards per game with 10 TDs and 11 interceptions. But running back Braelon helped carry the Badgers' load. He rushed for 1,268 yards on 12 touchdowns, which helped pave the way for Wisconsin's 9-4 season in 2021. The Cougars, on the other hand, finished 2021 7-6, including their 24-21 Sun Bowl loss to Central Michigan. They opened 2022 by eking out a 24-17 win over the Big Sky's Idaho Vandals.

But we'll judge these two teams' Week 1 performances to predict what we think we'll see in Week 2. And based on last week, Wisconsin gets the leg up in this competition.

Prediction
Wisconsin by 14 to 17 points

If you want to talk about a rout, let's talk about Texas Tech's 63-10 stomping of Murray State in Week 1. The Red Raiders put the Racers on skates and probably had them running to the buses, ready to erase the night from memory. But Week 2 won't be so seamless for Texas Tech as they play host to Houston.

Or will it be?

Tech QB Donovan Smith threw four touchdowns, and running back Tahj Brooks ran for three. Joey McGuire has his guys clicking on all cylinders early in his first year as the Red Raiders head coach. So Houston needs to heed Tech's warning from last week — especially since it took the Cougars three overtimes to beat UTSA 37-35. Barely beating a Conference USA team on your opening weekend. Now that's not very befitting of a Top 25 team, is it?

We'll take Texas Tech in this one.

It probably takes longer for the Trojans to drive from USC's campus to LAX than it will take them to fly from Los Angeles to Stanford. But at any rate, this matchup is giving Big Rivalry Energy. And we're here for it.

Lincoln Riley has a lot to prove in Year 1 at SC. He needs to prove that he wasn't running scared from the SEC. And he has got to make believers out of critical fans and impatient boosters that he's the guy who can bring SoCal back to its glory days. Quarterback Caleb Williams threw for 249 yards and two TDs in the squad's 66-14 Week 1 stomping of Rice. So maybe Riley & Co. are onto something.

But Stanford's veteran head coach David Shaw is also onto something. Shaw sees your Caleb Williams and raises you his E.J. Smith — Dallas Cowboys' legend Emmitt Smith's son. E.J. rushed for 118 yards and had five catches in the Cardinal's 41-10 win over Colgate. This will be a showdown between two prestigious football programs trying to rebound.

But we're giving the slight edge to SC.

The SEC went 13-1 in Week 1. The Pac-12 went 9-3. So on the strength of representing the better conference alone, we're going Mississippi State.

Both squads had pretty convincing Week 1 one wins. State toppled Memphis 49-23, and Arizona beat San Diego State 38-20. Wildcat QB Jayden de Laura threw for 299 yards and four touchdown passes in Week 1. Bulldog quarterback Will Rogers threw for 450 yards and five TDs in his season opener. Our prediction? This SEC-Pac-12 matchup will end up being a tale of dueling QBs.

And since this game kicks off at 11 p.m. ET, this will also be a certifiable Pac-12 After Dark flick.

Prediction
Mississippi State by 4 to 6 points

Now it's your turn to make some picks that could possibly make your pockets $25,000 fatter. Download the FOX Super 6 app, make your college football pick 6 selections and submit them before the first games kick off on Saturday.

And remember, use the hashtag #EricaSuper6 on social media so we can celebrate together as our picks start hitting!