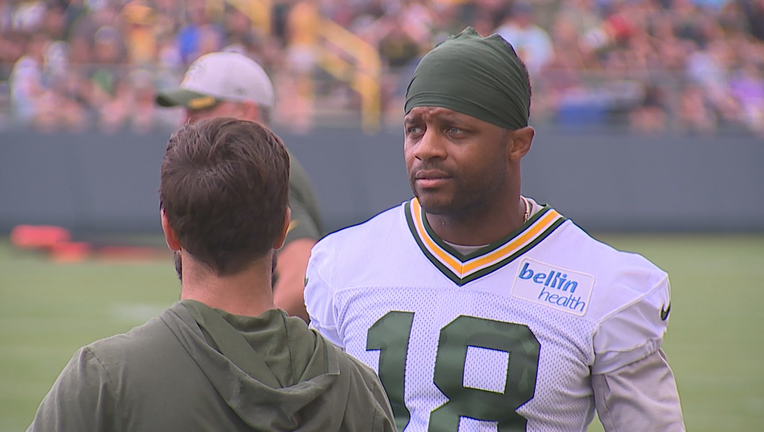 GREEN BAY - Randall Cobb's return to Green Bay was swift and his reunion was emotional.

"It felt like I never left," said Cobb. "That was the realization for me, when I walked in and I was like, 'Wow, I'm actually here,' and it feels good to be back."

And with that, Cobb's trade from the Texans back to Green Bay was complete.

"Whenever I got in the car and headed to the airport, I think it really sunk in for me then and I just broke down," Cobb said. "My wife was sitting there with me. She was crying, too, because I think she was more excited than I am to be back. We love this place. We love this city."

A beloved receiver who spent the first eight years of his career with the Packers, Cobb was one of Aaron Rodgers' most trusted targets especially in the slot.

The best friends have played in many memorable games together and now they get the chance to rekindle their on-field connection this fall.

"I'm really excited Randall's coming back," said Rodgers. "He's obviously a dear friend and a guy I still believe in that can really play, so to get Randall back is really special."

Bringing Cobb back gives the Packers another veteran receiver.

"I'm ecstatic man," said Davante Adams. "I'm just waiting on Jordy now and we'll be complete. We'll have the whole 187 back. I mean he can add a lot to this room, he's got a lot left in the tank."

General Manager Brian Gutekunst did so at the insistence of his quarterback.

"I think that's a big part of it," said Gutekunst. "Obviously without Aaron, I don't think we would probably be pursuing that. Randall's still a really good player. Seeing him last night just kind of reminded me what an impact he'll have in our locker room and for our football team. But this was a very important thing for Aaron, and that's why we did it."

Cobb, however, didn't feel comfortable saying he's the reason Rodgers decided to come back to the Packers.

"That would be way, way, way too egotistical for me to think that I'm the reason," said Cobb. "I think there's a lot of pieces that's in play with him coming back."

How exactly Cobb will fit into Matt LaFleur's offense is still to be seen, but Cobb believes the scheme fits his skills.

He's also being tasked in mentoring rookie Amari Rodgers who he's known for close to a decade.

But the decision to return to where his career started was simple.