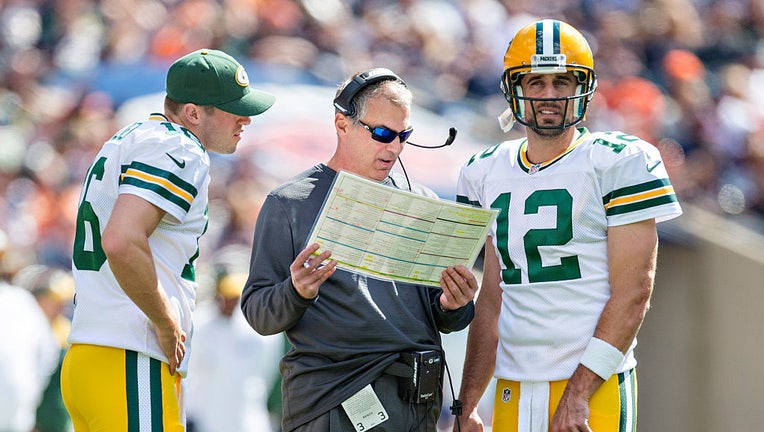 CHICAGO, IL - SEPTEMBER 13: Aaron Rodgers #12, Tom Clements and Scott Tolzien #16 of the Green Bay Packers during a timeout against the Chicago Bears at Soldier Field on September 13, 2015 in Chicago, Illinois. The Packers defeated the Bears 31-23. (

Clements also held that position when Rodgers led the Packers to a Super Bowl title during the 2010 season. Clements continued getting praise from the four-time MVP long after leaving Green Bay.

"I know that’s what he wants," Clements said this week. "He wants another Super Bowl. And that was one of the things that intrigued me."

Clements’ return to Green Bay is one of many changes to the Packers offensive staff this season as they adapt to life without Nathaniel Hackett, who spent the past three seasons as Green Bay’s offensive coordinator before becoming the Denver Broncos head coach.

Even though Packers coach Matt LaFleur lost much of his offensive staff, the new guys have plenty of familiarity with Green Bay’s organization.

They face a major task in trying to make sure Green Bay’s offense maintains its efficiency without All-Pro receiver Davante Adams, who was traded to the Las Vegas Raiders for a first-round and second-round draft pick.

"That’s going to be a big challenge," Stenavich said. "I know our personnel staff and our coaching staff are really working hard at trying to find the best fits, whether it’s through the draft or free agency, and I’m really excited about it."

The loss of his top playmaker could make it tough for Rodgers to maintain the form he showed while earning MVP honors the past two seasons. Rodgers at least should benefit from having Clements back on board.

Clements previously worked for the Packers from 2006-16, first as a quarterbacks coach and later as offensive coordinator on Mike McCarthy’s staff. Rodgers has said he owes Clements plenty of credit for his development.

After working as the Arizona Cardinals passing game coordinator and quarterbacks coach from 2019-20, Clements spent last season away from the game.

"I didn’t have the itch to come back," Clements said.

A conversation with Rodgers helped change his mind.

"It was because of coming back to Green Bay, with Aaron, chance to win a Super Bowl," Clements said. "Those were the primary considerations."

That conversation when Rodgers was still deciding whether to return to the Packers, request a trade or retire. LaFleur said at the NFL scouting combine that Rodgers had a "significant" role in Clements’ return.

"I think we interviewed each other to some level," LaFleur said at the time regarding his discussions with Clements. "But the conversations we had, it was pretty easy for me to see why he is such a great quarterback coach and developer and such a great communicator. He has such a great even-keeled demeanor."

Although Clements spent the past five seasons away from Green Bay, he still watched enough games to monitor Rodgers’ progress. He’s eager to join forces with the Packers superstar once again.

"Looking at it from afar, I thought he was playing a style more like when he was younger because he’s playing more under center, play-action passes," Clements said. "In the later years that we were here, it was more of a not-too-much under center, exclusively shotgun, more of a spread offense. And in the early years, we relied on the running game and the play-action pass and got in the shotgun more on third-down situations like that, and that’s more the style that I saw.

"When you can run the ball, it opens up a lot of things, and there’s been a lot of explosive passes over the years off the play-action pass game, and hopefully we can continue to do that."

The Milwaukee County Zoo on Wednesday announced that a prehensile-tailed porcupine was born March 27 in the Small Mammals building.