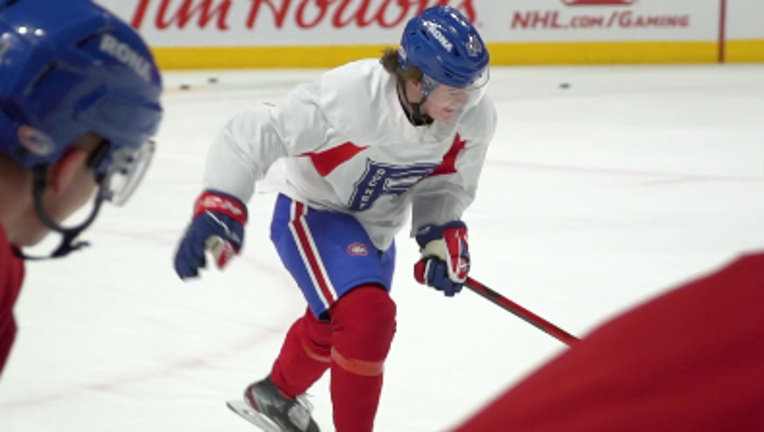 MADISON, Wis. - Wisconsin’s Cole Caufield can mark April 9 down as one for the record books.

"After the game, my phone was just blowing up," said Cole Caufield, the 2021 Hobey Baker award winner.

That day, the 20-year-old took home the Hobey Baker Award, which is given to the best player in college hockey.

"It was a special day for my family as a whole," said Caufield. "My grandparents too, just to see how happy they were, just made it that much more memorable."

FOX6’s Lily Zhao: "Do you have any idea where you're going to put the trophy? Is it going to be in your apartment, in your parents’ house? Where's it going to go?"

"I think they're shipping it to my parent's house so hopefully they can enjoy it when it gets there and stuff, and I can see it one day soon," said Caufield.

A well-deserved award for the Badgers forward, who as a sophomore, led the nation in goals and points scored.

Just 30 minutes after receiving that honor, he took the ice to make his AHL debut for Laval Rocket.

"It was a big, important day with the Hobey (Baker) announcement and that kind of took my mind off of things too," said Caufield. "I guess it was kind of the best of both worlds there going into my first pro game."

So how did Caufield’s pro debut go? He finished with two goals and an assist. Would you expect anything less?

"To get those three points and get a win out of it was pretty special too," said Caufield.

Caufield’s start right out of the gates for Laval Rocket, the AHL affiliate of the Montreal Canadiens, is proof of why the team signed him to a 3-year entry level contract.

But right now, it’s all about acclimating to that next level of competition.

"As the game of hockey progresses and gets faster, you have to be able to make the jump and be prepared for that and understand, you know, that the game is pretty hard at this level," said Caufield. "Honestly, I think I've prepared myself this year a lot more than I ever have before. I think that showed in my first couple of games here that I made the jump when I was ready and didn't go too soon."

FOX6’s Lily Zhao: "There is just so much excitement around you being with the Canadiens organization, so how can you manage those expectations whenever you are called up?"

"Obviously, it's a special organization and there's a lot of talk around this team," said Caufield. "For me, it's all about taking it day by day, just enjoying every moment because every day, you know, of being a part of this organization is really something special. I love this game and everything that comes with it, so I've been having a lot of fun with it and I'm just going to stick with that."