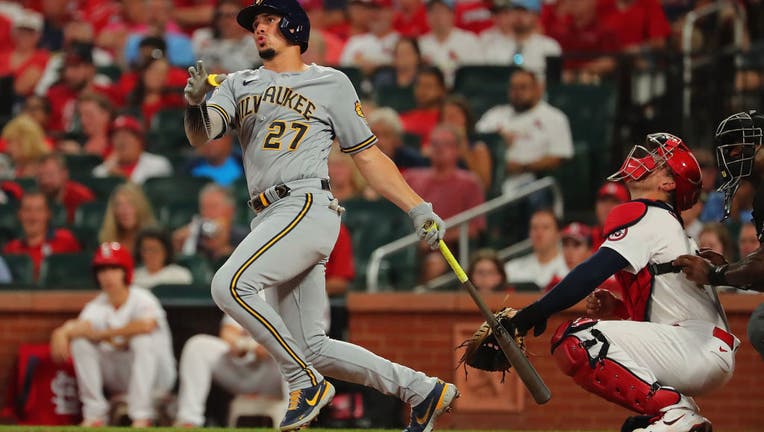 Willy Adames #27 of the Milwaukee Brewers bats in a run with a double against the St. Louis Cardinals in the fourth inning at Busch Stadium on August 19, 2021 in St Louis, Missouri. (Photo by Dilip Vishwanat/Getty Images)

Nolan Arenado also drove in a pair of runs as St. Louis erased a three-run deficit to avoid a three-game sweep. The Cardinals sit 3 ½ games behind San Diego for the second National League wild-card spot.

"They threw their best arms at us," O’Neill said. "Honestly that’s what we should expect being the Cardinals, anyway. We’re in the hunt. We’re obviously looking up on the leaderboard there right now, but it’s a day-by-day thing."

Arenado started the two-out, fifth-inning rally with a run-scoring single to left off Brandon Woodruff (7-7) that plated Andrew Knizner, cutting the St. Louis deficit to 4-2.

O’Neill followed with a 450-foot, three-run homer to left field to put St. Louis ahead 5-4.

Two pitches later, Nootbaar hit his third home run of the season to right field for the Cardinals’ seventh set of back-to-back homers this season.

"Lars got a great swing and played some great ‘D’ out there, too," O’Neill said. "It’s always sick going back-to-back with the boys."

Jon Lester allowed four runs on six hits and three walks in 4 1/3 innings. He was knocked to his knees in the first inning when Christian Yelich lined a ball off his right calf, but he was able to remain in the game.

"That’s one tough Hombré, that’s a man’s man," Cardinals manager Mike Shildt said. "He went out there, didn’t make any excuses, said I’m going to figure out a way to keep pitching and did it. I’m sure it probably affected him some but we’ll probably never know the real truth."

"I thought it was going to be like a full inning," Fernández said about how he envisioned his first career win. "For me I got two outs and got my first ‘W’. It was amazing."

Woodruff allowed six runs on eight hits and a walk in five innings as the Brewers lost for just the second time on a season-high, 10-game road trip.

"They did some damage with two outs," Woodruff said. "When I needed to make some pitches, I just made some bad pitches."

Milwaukee scored all four of its runs in the top of the fourth inning. Manny Piña doubled to left field to score Avisaíl García and tie the game at 1. Kolten Wong later hit a two-run single and Willy Adames drove in Wong with a double to left field to expand the Milwaukee lead to 4-1.

Cardinals: RHP Miles Mikolas (0-0, 2.25 ERA) will be activated off the injured list to make his second start of the season at home to open a three-game series against Pittsburgh on Friday night. The Pirates will start RHP Mitch Keller (3-10, 6.86 ERA)

An Amber Alert has been issued for 13-year-old Terrence Trammell of Milwaukee who was last seen near 59th and Center around 8:40 p.m. on Thursday, Aug. 19.