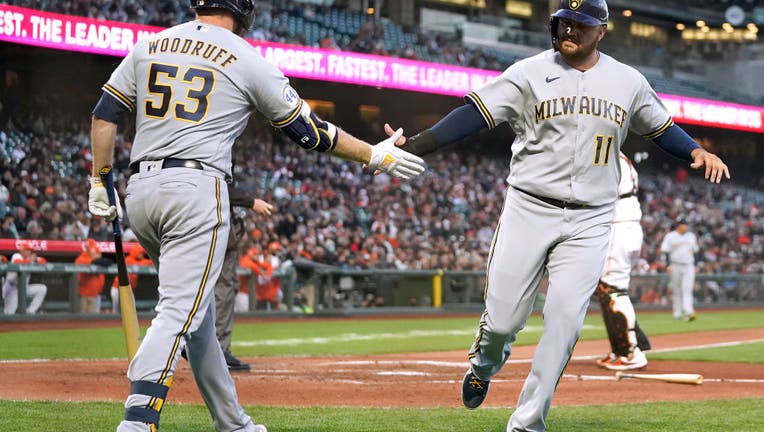 SAN FRANCISCO, CALIFORNIA - AUGUST 31: Rowdy Tellez #11 of the Milwaukee Brewers is congratulated by Brandon Woodruff #53 after Tellez scored against the San Francisco Giants in the top of the third inning at Oracle Park on August 31, 2021 in San Fra

SAN FRANCISCO - Lorenzo Cain homered and added an RBI single, and the Milwaukee Brewers won their second straight over San Francisco, beating the Giants 6-2 on Tuesday night in a matchup of division leaders.

Christian Yelich singled twice and scored two runs, extending his hitting streak to 10 games. The 2018 MVP is batting .385 (15 for 39) during the streak.

"Coming in here and winning the first two is huge against essentially the best team in baseball," Woodruff said. "Two team wins, that’s awesome. Hopefully, we see these guys later in October. "

Brandon Belt hit his 20th home run for San Francisco. Wilmer Flores is also connected. The Giants struck out 15 times and have lost four of five.

"I don’t know that there’s anything specific that I’d point to," Giant's manager Gabe Kapler said. "We just haven’t played all-around good baseball, and we’ve gotten it handed to us by some good pitching."

Cain homered off Johnny Cueto leading off the second and singled in Rowdy Tellez in the third after Tellez’s RBI triple. The Brewers center fielder also nearly robbed Belt of his home run in the sixth with a leaping attempt, then lingered on the wall with his left arm draped over the top of it after the ball went over.

"I was really close," Cain said. "I got Go-Go Gadget arms. Tried to bring it back, fell a little short."

Jake Cousins walked two but struck out the side in the seventh. Brent Sutter retired six.

Cueto (7-7) was knocked around after being scratched from his scheduled start Monday when he experienced cold and flu-like symptoms and was placed on the COVID-19 injured list. The 35-year-old right-hander, who received intravenous fluids and medication, retired 11 batters and allowed six runs and 10 hits.

"I don’t feel so great, but that’s not an excuse," Cueto said through a translator.

Milwaukee jumped on the Giants for two runs in the first on three soft singles and an RBI groundout by Avisaíl García.

Yelich made it 6-0 when he singled and scored from first when Omar Narváez’s pop-up fell between third baseman Kris Bryant and left fielder Alex Dickerson.

"We did a nice job against Cueto," Brewers manager Craig Counsell said. "There was just pressure and he never really got settled in. It felt like we made a whole bunch of his pitches uncomfortable, and that’s not easy to do."

The Giants were held to two hits over the first five innings and stranded two runners in the sixth and seventh.

Belt’s home run was his ninth in August. … Cueto is 8-2 over his last 12 starts against the Brewers but hasn’t beaten them since 2016. … Milwaukee’s 45 road wins are two shy of the franchise record set in 1982.

GIANTS 3B COACH TO STEP DOWN

Long-time Giants third base coach Ron Wotus will step away from full-time coaching at the end of the season and may take another position within the organization. Wotus has been coaching third base for the Giants since 1998 and is the longest tenured-coach in the team’s San Francisco era. Wotus received a standing ovation from the crowd of 20,897 before the bottom of the first inning.

The Giants added José Quintana to the 26-man roster before the game and optioned RHP John Brebbia and IF Jason Vossler to Triple-A Sacramento.

Brewers: SS Willy Adames was back at shortstop. Adames did not play Monday because of a sore left quadriceps muscle that limited him to DH duties over the weekend in Minnesota.

Giants: Cueto has twice tested negative for COVID-19 since returning last week from a funeral in his native Dominican Republic. … 2B Tommy La Stella (left side tightness) was held out for a second straight game.

Giants RHP Kevin Gausman (12-5, 2.49 ERA) hasn’t lost since July 30 but has allowed seven earned runs over his last 14 2/3 innings. LHP Brett Anderson (4-8, 4.27) returns to the mound after coming out of his last start because of right hip tightness.

Virtual learning was a listed stressor for 60% of children who died by suicide in Milwaukee County, the medical examiner's office said.

Experts say while it may be difficult to intervene in situations of abuse or neglect, when it comes to protecting children, everyone can play a role.