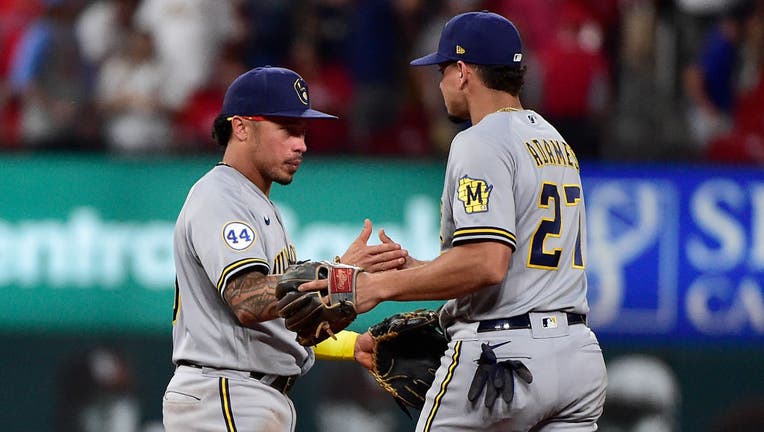 ST LOUIS, MO - AUGUST 17: Kolten Wong #16 of the Milwaukee Brewers celebrates with Willy Adames #27 after a 2-0 win over the St. Louis Cardinals at Busch Stadium on August 17, 2021 in St Louis, Missouri. (Photo by Jeff Curry/Getty Images)

ST. LOUIS - Corbin Burnes took a no-hitter into the sixth inning and Kolten Wong had three hits and was hit by a pitch against his former team as the Milwaukee Brewers beat the St. Louis Cardinals 2-0 Tuesday night.

Burnes (8-4) allowed two hits and two walks and had three strikeouts in six innings of work. He is 6-0 in his last 13 starts and has not lost since May 25, against San Diego.

"Every time he steps on the mound, you kind of have that confidence knowing that it’s probably going to be a good day for us," Wong said. "He kind of has that about him. When he walks in from the bullpen you can see he’s confident, and we kind of feed off it."

Brad Boxberger and Devin Williams each pitched an inning of relief before Josh Hader pitched the ninth inning to earn his 24th save in 25 chances.

Milwaukee is 41-20 on the road this season and 16-2 in its last 18 games away from American Family Field.

"That’s baseball," Wainwright said. "Sometimes those same pitches, same balls get hits and go right to somebody and you’re a hero. And sometimes they don’t and you’re the goat, you’re the loser."

The loss snaps a six-game winning streak for the Cardinals and a four-start winning streak for Wainwright. This game marked the first of 13 over the season’s last seven weeks between the Brewers and Cardinals, who sit 11 games behind Milwaukee in the NL Central, but four behind San Diego for the second wild card spot.

"They’re going to have to win a lot of baseball games and that’s going to include beating us to get back in it," Burnes said of the Cardinals. "Their path to the postseason is going to come through us, so this is obviously a big series for not only them but for us to continue playing good baseball."

Milwaukee left 13 runners on base and lost another when Wong was thrown out at the plate driving to score from second base on Eduardo Escobar’s first inning to single to left field.

Wong put Milwaukee up 1-0 with a two out bloop double to left field that fell between Tyler O’Neill, Nolan Arenado, and Edmundo Sosa, scoring Rowdy Telez in the top of the second inning.

Omar Narváez drove in Christian Yelich with a double down the right field line to push the lead to 2-0.

Tommy Edman broke up Burnes’ no-hit bid with a single to left field in the fifth inning. Paul Goldschmidt followed with a single to center field moving Edman to third. Burnes then got Nolan Arenado and Tyler O’Neill to pop out in foul territory to end the threat and the inning.

Wainwright’s outing was his 350th career start making him the 22nd player in MLB history to make at least 350 starts with one franchise. Jesse Haines, Bob Gibson, and Bob Forsch also accomplished the feat with the Cardinals.

Brewers: RHP Janel Gustave (COVID-19) is poised to go out on a rehab assignment as soon as Friday. Manager Craig Counsell said he should throw a bullpen session while the team is in St. Louis.

Cardinals: Placed OF Dylan Carlson (right wrist sprain) on the 10-day injured list retroactive to Aug. 14. He was originally in the starting lineup but was scratched after experiencing soreness from taking swings on Monday’s off day. OF Austin Dean was recalled from Triple-A Memphis to take Carlson’s roster spot. RHP Miles Mikolas (right forearm tightness) is scheduled to start against Pittsburgh on Pirates. Mikolas missed all of 2020 and has only made one start in 2021.

I-94 westbound is closed from Johnson Creek to Lake Mills following a multi-vehicle fatal crash.

The Burlington Area School District board decided to make masks optional to start the year. A previous meeting was derailed by parental outbursts.