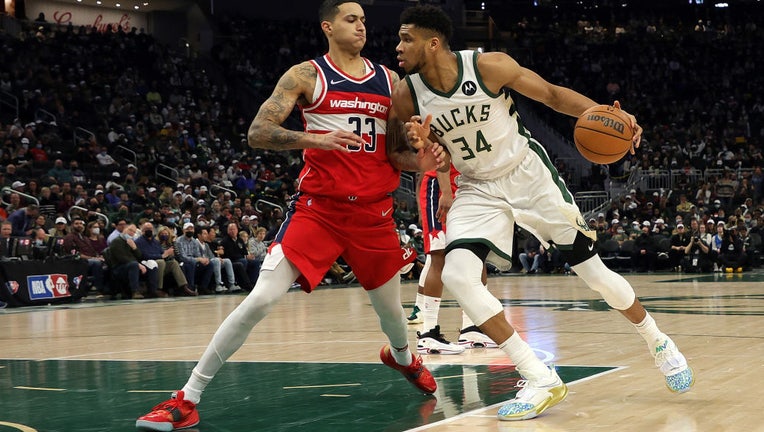 MILWAUKEE, WISCONSIN - FEBRUARY 01: Giannis Antetokounmpo #34 of the Milwaukee Bucks is defended by Kyle Kuzma #33 of the Washington Wizards during the first half of a game at Fiserv Forum on February 01, 2022 in Milwaukee, Wisconsin. NOTE TO USER: U

MILWAUKEE - Giannis Antetokounmpo had 33 points, 15 rebounds and 11 assists for his fourth triple-double of the season as the Milwaukee Bucks beat Washington 112-98 on Tuesday night to hand the Wizards their sixth straight loss.

The Wizards were playing without star guard Bradley Beal due to a sprained left wrist. The Wizards had announced Monday that Beal would miss at least the rest of this trip, which ends Wednesday at Philadelphia.

Wizards coach Wes Unseld Jr. said before the game that Beal had left the team to visit a specialist earlier in the day.

"There was a level of discomfort," Unseld said. "I think he had some swelling in there. There was some pain. Obviously that’s always a concern. They tried to treat it in-house and it didn’t respond as well as they’d like, so we’re just making sure. We’re checking all the boxes and doing the best we can for him to make sure there’s nothing further to worry about. Get it checked out, have him see a specialist… and hopefully we’ll get some good news."

The Bucks squandered a 17-point lead before rallying in the fourth quarter as they bounced back from a 136-100 home loss to the Denver Nuggets, their second-most lopsided defeat of the season.

Washington trailed 20-5 with the game barely five minutes old but clawed its way back into the game and finally took its first lead on Rui Hachimura’s tiebreaking 3-pointer with 8:35 left.

Antetokounmpo scored the game’s next five points and put the Bucks back ahead by converting a three-point play with 7:50 left, driving to the basket, scoring off the glass and drawing a foul on Hachimura.

Washington got within 95-94 on consecutive 3-pointers by Spencer Dinwiddie and Caldwell-Pope, but Kuzma missed a 3-point attempt that would have put the Wizards ahead with 4:33 left. Milwaukee answered as Antetokounmpo clinched his triple-double by recording his 10th assist on Portis' layup.

NASCAR, Tyler Reddick ready for the Clash at The Coliseum

The LA Coliseum has hosted three Summer Olympics and this weekend, it will host a NASCAR race. Tim Van Vooren goes Beyond the Game with Tyler Reddick.