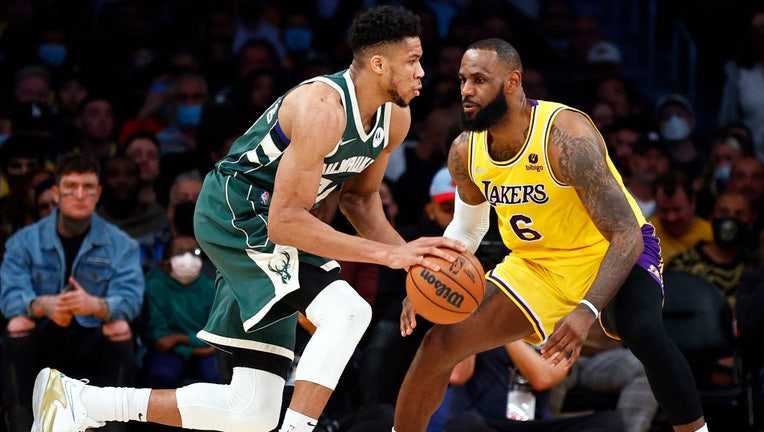 LOS ANGELES, CALIFORNIA - FEBRUARY 08: Giannis Antetokounmpo #34 of the Milwaukee Bucks dribbles the ball against LeBron James #6 of the Los Angeles Lakers in the second quarter at Crypto.com Arena on February 08, 2022 in Los Angeles, California. NOT

LOS ANGELES - Giannis Antetokounmpo scored 44 points on 17-for-20 shooting, and Bobby Portis had 23 points with five 3-pointers in the Milwaukee Bucks' 131-116 victory over the Los Angeles Lakers on Tuesday night.

Khris Middleton scored all of his 21 points in the first half as the defending NBA champions won their fourth straight overall and swept back-to-back games against LA's two teams.

Antetokounmpo was largely unguardable in the two-time MVP's highest-scoring performance since Nov. 17, getting 14 rebounds and eight assists while making his first 11 shots.

"He made it look easy, honestly," Middleton said. "That just shows the level of how he’s playing. He was knocking down his jump shot. He’s got guys going for his pump fake. Just the way he let the game come to him and stay patient, it was pretty fun to watch."

Milwaukee jumped to a 24-point lead in the first half with 70% shooting and led by 30 midway through the third quarter before surviving the Lakers' strong late rally. The Bucks hung on for their third win on a four-game West Coast road trip that ends with an NBA Finals rematch in Phoenix on Thursday.

"Obviously when you make shots, the game is a lot easier, looks a lot better," Antetokounmpo said. "I know I’m going to try to get my teammates involved and look for the best way to help the team, but sometimes when you start making shots, you feel better about yourself, you defend better. Today was one of those games."

LeBron James scored 27 points and Anthony Davis had 22 points and nine rebounds for the Lakers, who couldn't catch up to the champs even on a rare night with both superstars in their injury-riddled lineup. LA has lost five of seven to fall back to three games below .500.

The Lakers rallied impressively in the fourth quarter, trimming Milwaukee's lead to 10 points midway through the period with a 20-5 run. Portis' fifth 3-pointer stopped the surge, and the Lakers never got closer than 11 again.

Los Angeles dropped to 10-8 with both James and Davis in their lineup during a season totally lacking in continuity due to lengthy absences for its two cornerstones. James looked tired at times in just his second game back from a five-game absence for the Lakers, who haven't won back-to-back games since Jan. 7.

Malik Monk scored 20 points and Stanley Johnson added a season-high 16 for the Lakers in a reserve role.

After giving up 42 points to the Knicks in the first quarter on Saturday night, the Lakers allowed 38 to the Bucks in the opening period. Milwaukee took a 51-28 lead in the second by scoring seven points on one trip down the floor with a pair of 3-pointers sandwiching a flagrant foul.

The Bucks hit 70% of their shots until late in the first half and led 78-56 at halftime. Antetokounmpo finally missed a shot with 2:19 left in the third quarter, and he also got a rare technical in the third for arguing a foul called against him.

Johnny Davis had a game-high 25 points, leading No. 14 Wisconsin to a 70-62 victory over No. 17 Michigan State on Tuesday night.

UConn had a players' meeting after dropping back-to-back games to Creighton and Villanova to talk about getting back its identity as an aggressive, passionate team that outmuscles its opponents.