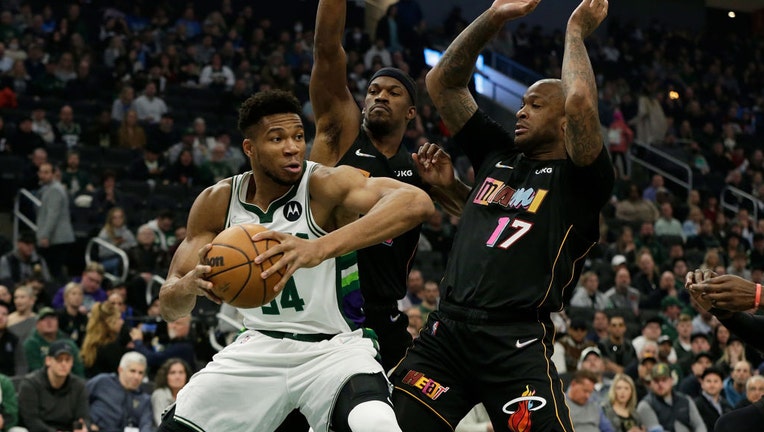 MILWAUKEE, WISCONSIN - MARCH 02: Giannis Antetokounmpo #34 of the Milwaukee Bucks looks to score during the first half of the game against the Miami Heat at Fiserv Forum on March 02, 2022 in Milwaukee, Wisconsin. NOTE TO USER: User expressly acknowle

MILWAUKEE - Jrue Holiday banked in a driving layup with 1.9 seconds left and the Milwaukee Bucks rallied from a 14-point deficit in the final six minutes to beat the Miami Heat 120-119 on Wednesday night.

The Bucks outscored Miami 21-6 down the stretch to snap the Heat’s four-game winning streak.

After Khris Middleton made a 3-pointer with 13.5 seconds remaining to get the Bucks within one, Giannis Antetokounmpo forced a jump ball against Jimmy Butler on the ensuing inbounds pass.

Antetokounmpo won the tip and got it to Bobby Portis. Holiday got the ball from Portis, worked his way to the other end of the court and made the winning basket.

The Heat had no timeouts left, and Tyler Herro missed a desperation 3-point attempt at the buzzer.

Miami lost despite shooting 21 of 44 from 3-point range. Herro led the way by scoring 30 points and shooting 6 of 10 from beyond the arc.

Antetokounmpo had 28 points, 17 rebounds and five assists for the Bucks. Middleton scored 26, Holiday had 25 and Portis added 15.

Miami appeared to have the game in hand when it took a 113-99 lead with a 9-0 run that featured two 3-pointers from Vincent and one from Herro.

But the Bucks wouldn’t go away.

They got the lead down to two points twice in the last two minutes, but the Heat responded each time as Herro sank a 16-foot jumper and Adebayo made a 12-footer.

Then Middleton's shot put the Bucks back in striking range before Holiday delivered the knockout blow.