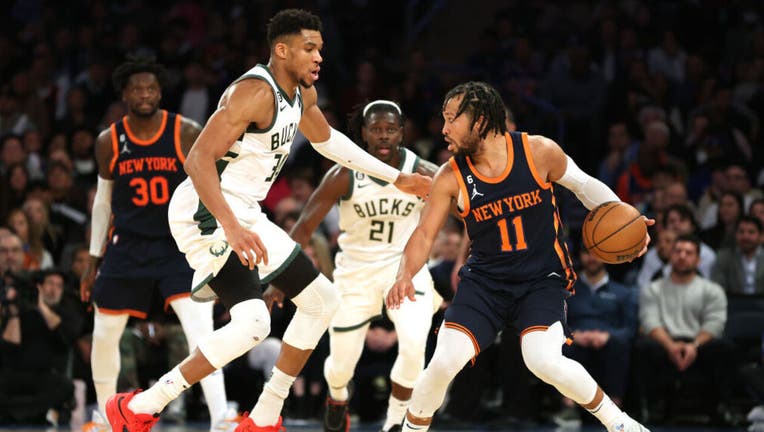 Jalen Brunson #11 of the New York Knicks dribbles against Giannis Antetokounmpo #34 of the Milwaukee Bucks during the second half at Madison Square Garden on Jan. 9, 2023, in New York City. (Photo by Sarah Stier/Getty Images)

NEW YORK - Giannis Antetokounmpo had 22 points and 10 rebounds, and the Milwaukee Bucks used 3-point shooting to wipe out a 17-point deficit in the second half and beat the New York Knicks 111-105 on Monday night.

Joe Ingles added a season-high 17 points and Brook Lopez also scored 17 for the Bucks, who made 12 3-pointers after falling behind 70-53 with five minutes remaining in the third quarter.

Lopez made one that snapped a 97-all tie before Jrue Holiday — forced to the bench after committing three fouls in the first 4 1/2 minutes — scored five straight Milwaukee points before the Bucks closed it out at the free throw line to snap the Knicks' four-game winning streak.

Jalen Brunson scored a career-high 44 points for the Knicks, adding seven assists. Julius Randle had 25 points, 16 rebounds and five assists, but was just 1 for 12 from 3-point range.

The Knicks were hoping to continue streaking to the midpoint of their schedule, having followed an eight-game winning streak and a five-game skid with four straight victories. They fell to 22-19.

Ingles, who didn't play for the Bucks until last month after missing the first 29 games recovering from a torn ACL in his left knee, helped fuel the comeback with five 3-pointers.

Randle finally made a 3-pointer after an 0-for-9 first half on the first possession of the third quarter, and his free throws capped a 13-2 spurt midway through the period that extended a six-point lead to 70-53.

The Knicks still led by 16 after Randle's three-point play with 2:25 remaining, but didn't make another basket in the quarter as Milwaukee closed with a 13-2 run of its own to trim it to 78-73.

Obi Toppin opened the fourth with a 3-pointer, but Lopez, Grayson Allen and Ingles followed with three in a row for Milwaukee to give the Bucks an 82-81 lead.

Neither team led by more than three again until Holiday's 3-pointer made it 103-99 with 47 seconds to play.

Brunson’s aggressive start quickly put Holiday in foul trouble, forcing him to the bench within 4 1/2 minutes. But the Bucks' big men were much more effective defending Randle, who was 1 for 12, missing all eight 3-point attempts.

Brunson was just 1 for 6 in the second, but Immanuel Quickley stepped up with 13 points as the Knicks took a 51-46 lead to the break.