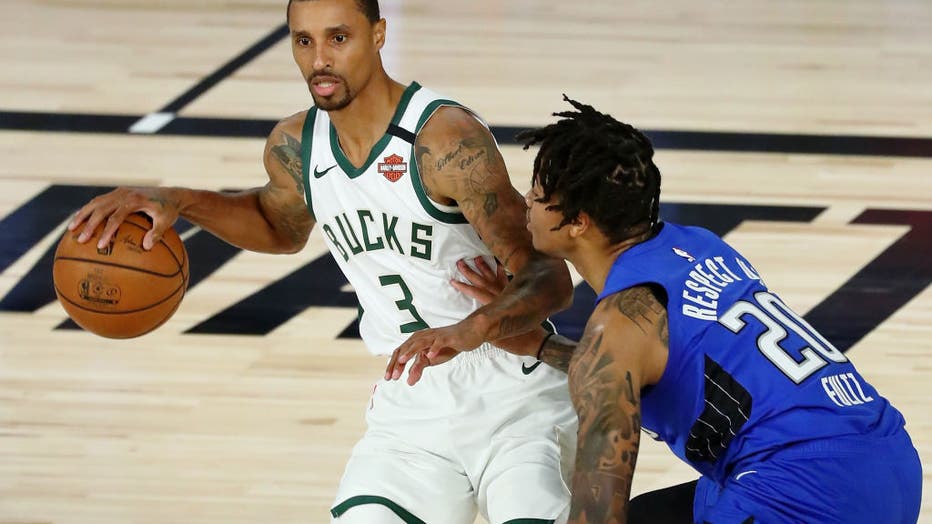 George Hill dribbles while defended by Markelle Fultz of the Orlando Magic in Game 1 in the first round of the NBA playoffs at The Field House at ESPN Wide World Of Sports Complex on August 18, 2020 in Lake Buena Vista, Florida. (Photo by Kim Klement

"George had a major impact on our success in his two seasons with us," said Bucks General Manager Jon Horst. "He is a consummate professional, an experienced leader and a skilled, veteran guard who we’re thrilled to add to this team. George and his family are incredible people, and we welcome them back to Milwaukee."

The Mississippi native has seen action in 44 playoff games in his career, which includes two trips to the Conference Finals and an NBA Finals appearance with the Cavaliers in 2018. In the postseason, Hood is averaging 7.9 points and 2.2 rebounds in 20.7 minutes per game.

"Rodney is a versatile wing and a consistent three-point threat who will enhance our outside shooting," Horst said. "He’s a talented player with deep playoff experience and will be valuable to our depth throughout the season. We’re excited to bring Rodney to Milwaukee."

In four seasons with the Celtics, Ojeleye, 26, held averages of 3.5 points and 2.1 rebounds across 254 games (24 starts). He also appeared in 38 playoff games with Boston over the last four seasons and averaged 1.8 points in 10.5 minutes per game.

"Semi’s an athletic defender who will add depth to our frontcourt," Horst added. "He has the ability to knock down shots from the perimeter, can defend multiple positions and will be a great addition to our roster. We welcome him to Milwaukee."

Pitcher Adrian Houser has become the latest Milwaukee Brewers player to test positive for the coronavirus.