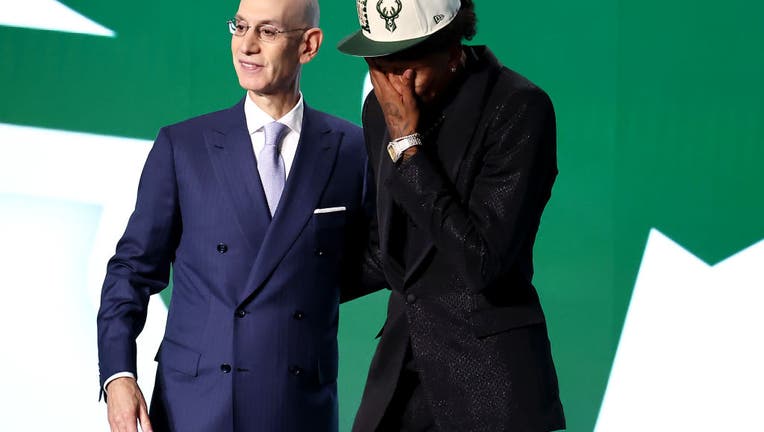 MILWAUKEE - The Milwaukee Bucks capitalized on a rare opportunity to pick in the first round of the draft by taking NBA G League Ignite wing MarJon Beauchamp with the 24th overall selection Thursday night.

Beauchamp, who is 6-foot-5, averaged 15.1 points and 5.8 rebounds for the Ignite this season. That was the latest step in his circuitous path to the NBA, which included stops at four different high schools and Yakima (Washington) Valley College.

The 21-year-old has a 7-foot-1 wingspan and is regarded as a strong defensive player. He was the second Ignite player to get drafted, as Dyson Daniels went eighth overall to the New Orleans Pelicans.

Assuming Beauchamp stays with the Bucks, it would mark the first time the Bucks have made an opening-round pick that they’ve kept beyond draft night since taking Donte DiVincenzo out of Villanova with the 17th overall selection in 2018.

DiVincenzo spent 3 ½ seasons with the Bucks before getting dealt to Sacramento in February as part of the four-team trade that brought them veteran center Serge Ibaka.

Milwaukee hasn’t made much use of the draft lately as it has focused on acquiring veterans to support two-time MVP Giannis Antetokounmpo, the 15th overall selection in 2013. The Bucks’ playoff roster included only two other players they drafted: 2020 second-round pick Jordan Nwora from Louisville and 2021 selection Sandro Mamukelashvili from Seton Hall.

The Bucks also have limited their first-round opportunities in future years because they’ve used much of their draft capital to obtain established players.

They traded their 2023 first-round pick in the deal that helped them add P.J. Tucker for their 2021 championship run. They dealt their 2025 and 2027 first-round selections in the trade that brought them Jrue Holiday. They also have potential pick swaps with New Orleans in 2024 and 2026 resulting from the Holiday trade.

The Bucks could use a younger player to help support a nucleus that’s getting older. Although Antetokounmpo is just 27, the Bucks’ other top three players are well into their 30s. Khris Middleton turns 31 in August, Holiday just turned 32 and Brook Lopez is 34.

Horst disputes the notion the Bucks are nearing the end of their championship window and pointed out the Golden State Warriors just won the title with a roster featuring Stephen Curry (34), Klay Thompson (32) and Draymond Green (32).

"Age is on our side, in my opinion, with where we’re at, Giannis entering his prime, Khris and Jrue in the middle of their prime, Brook on the back end of his prime but still playing at a prime level," Horst said last week.