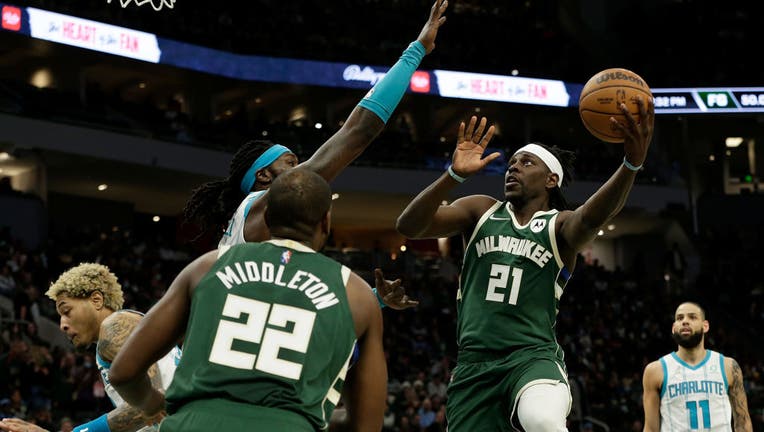 MILWAUKEE, WISCONSIN - FEBRUARY 28: Jrue Holiday #21 of the Milwaukee Bucks goes up for a shot during the first half of the game against the Charlotte Hornets at Fiserv Forum on February 28, 2022 in Milwaukee, Wisconsin. NOTE TO USER: User expressly

MILWAUKEE - Giannis Antetokounmpo had 26 points and 16 rebounds and the Milwaukee Bucks scored a season-high 44 points in the second quarter on the way to a 130-106 win over the Charlotte Hornets on Monday night.

Jrue Holiday had 21 points and eight assists, and Bobby Portis added 20 points and 10 rebounds for the Bucks, who were coming off a loss to the Brooklyn Nets on Saturday.

Milwaukee made its first 26 free throws and finished 32 of 37 from the line. Antetokounmpo made all 14 of his free throws.

The game was tied at 32-all after the first quarter, and Charlotte trailed by nine, 48-39, with just under seven minutes left in the second. The Bucks outscored the Hornets 38-14 over the rest of the quarter and led 76-53 at halftime. Portis scored eight points during the run.

The Bucks’ previous high point total in a quarter this season was 43 points in the third period of a 117-113 win at Boston on Dec. 25.

Antetokounmpo thrilled the crowd in the first quarter with a blocked shot. After driving to the basket and missing a layup, then pleading for a foul to be called, Antetokounmpo sprinted the floor to swat away a layup attempt by Mason Plumlee, then raised his right arm in triumph.

How to help Ukraine

To protect donors from potential scams related to the war in Ukraine, GoFundMe.com mobilized a crisis team and created a list of verified fundraisers.