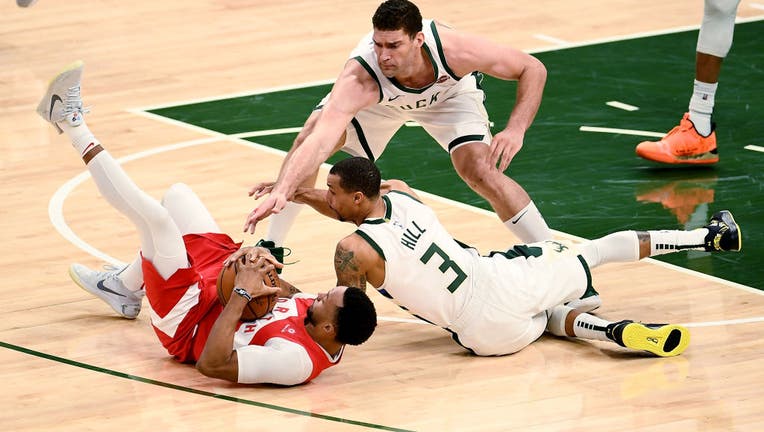 MILWAUKEE, WISCONSIN - MAY 23: Norman Powell #24 of the Toronto Raptors battles for a loose ball against Brook Lopez #11 and George Hill #3 of the Milwaukee Bucks in the third quarter during Game Five of the Eastern Conference Finals of the 2019 NBA

MILWAUKEE - Milwaukee Bucks center Brook Lopez is expected to play for the first time since the season opener Monday night when the defending champions visit the Utah Jazz.

Lopez has been out with a back injury that caused him to undergo surgery Dec. 2. The 7-footer played 70 games for the Bucks last season and averaged 12.3 points and 5 rebounds.

The Bucks announced Sunday night that Lopez and reserve guard George Hill will both return to action Monday. Neither player is listed on the injury report for Monday night’s game.

In other injury-related Bucks news, reserve forward DeAndre’ Bembry will miss the rest of the season with a torn right anterior cruciate ligament and medial collateral ligament.

Hill has missed the Bucks’ last 16 games with neck soreness. He has played in 41 games this season and has averaged 7 points, 3.2 rebounds and 2.5 assists.

Bembry injured his knee when he landed awkwardly after leaping to defend a 3-point attempt Saturday night in the Bucks’ loss at Golden State. Bembry signed with Milwaukee on Feb. 16 and appeared in eight games for the Bucks.

Brookfield police are looking to identify a man wanted for stealing more than $600 worth of merchandise from Kohl's.