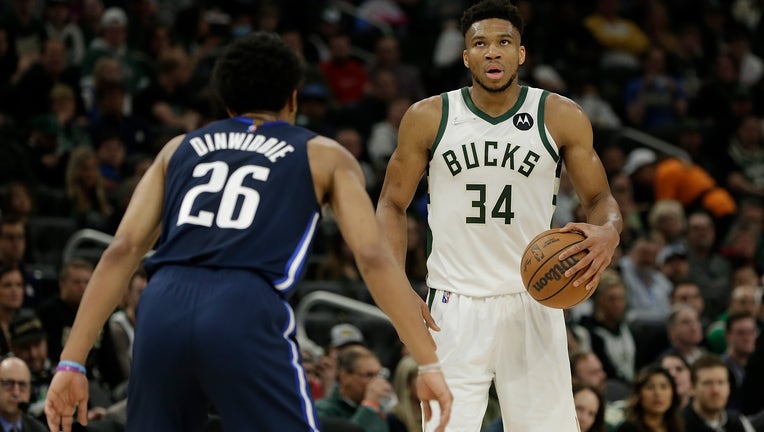 MILWAUKEE, WISCONSIN - APRIL 03: Giannis Antetokounmpo #34 of the Milwaukee Bucks looks up in the final seconds of the first half against the Dallas Mavericks at Fiserv Forum on April 03, 2022 in Milwaukee, Wisconsin. NOTE TO USER: User expressly ack

MILWAUKEE - Luka Doncic scored 32 points and matched a season high with 15 assists to help the Dallas Mavericks defeat the Milwaukee Bucks 118-112 on Sunday.

Giannis Antetokounmpo led the Bucks with 28 points and 10 assists. Milwaukee was essentially at full strength Sunday after resting all of its usual starters in a 153-119 loss to the Los Angeles Clippers on Friday night.

Doncic flirted with a triple-double before finishing with eight rebounds. In six career games against the Bucks, Doncic has averaged 26.8 points, 11.3 assists and 9.2 rebounds with three triple-doubles.

Dallas' Dwight Powell added 22 points and 13 rebounds — one off his career high.

After a basket by Bobby Portis briefly gave the Bucks a one-point lead early in the fourth, Doncic led the Mavericks back by scoring or assisting on each of Dallas’ first 11 points in the final period.

Antetokounmpo made two free throws to cut the margin to five, but Doncic found Reggie Bullock for a corner 3-pointer that extended Dallas’ lead to 101-93 with 6:55 remaining.

The Bucks made one final charge.

Jrue Holiday sank a 3-pointer to cut the Mavericks’ lead to 101-98 midway through the fourth quarter. Powell responded by converting a conventional three-point play to make it 104-98 with 5:52 remaining.

The margin didn’t drop below five the rest of the way.

Bullock had 16 points, Jalen Brunson 15 and Dorian Finney-Smith and Spencer Dinwiddie 11 each for the Mavericks. Jrue Holiday had 20, Portis 17, Brook Lopez 14, Pat Connaughton 12 and Khris Middleton 11 for the Bucks.

The Milwaukee Fire Department confirmed for FOX6 News that there has been a stabbing near Brown Deer Road and Swan Road on the city's northwest side.

Adam Jarchow and Eric Toney are the leading candidates among Republicans vying in the August primary to challenge Democratic Attorney General Josh Kaul this fall.