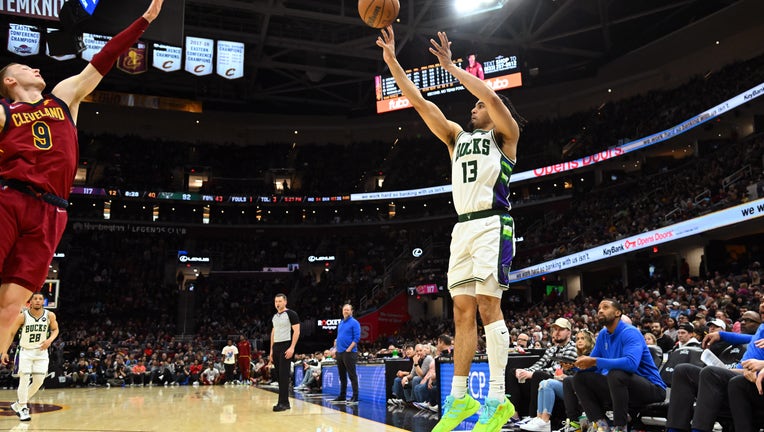 CLEVELAND, OHIO - APRIL 10: Jordan Nwora #13 of the Milwaukee Bucks shoots over Dylan Windler #9 of the Cleveland Cavaliers during the fourth quarter at Rocket Mortgage Fieldhouse on April 10, 2022 in Cleveland, Ohio. The Cavaliers defeated the Bucks

CLEVELAND - The Milwaukee Bucks used the final game of the regular season to rest up before defending their NBA crown.

The Cavaliers didn't have any such luxury.

Kevin Love made eight 3-pointers and scored 32 points as Cleveland took the No. 8 play-in spot — and a matchup against Brooklyn — with a 133-115 victory Sunday over the Bucks, who sat superstar Giannis Antetokounmpo and their other regulars.

The Cavs were in jeopardy of falling all the way to the No. 10 seed in the Eastern Conference with a loss.

However, they ended any suspense immediately, scoring the first 14 points and dominating a team of backups to the Bucks' backups. The Cavs made 10 3-pointers while building a 28-point lead in the first quarter and Cleveland led by 33 at half.

"They just played the game with purpose," coach J.B. Bickerstaff said. "Times this year we’ve been in circumstances where we didn’t play the game with 48 minutes of purpose. Tonight, I thought they did a great job of coming out and setting the tone and playing the game the way we needed to play it."

Love did all his damage in 15 minutes, matching his career high for 3s and adding 10 rebounds.

According to Elias Sports Bureau, Love is the first player since 1954 (in the shot clock era) to record at least and 10 rebounds in 15 minutes or less.

Rookie Evan Mobley added 18 points and 10 rebounds for the Cavs, who won just 22 games a year ago and weren't expected to be anywhere near the playoffs. But here they are and will now face the Nets in Brooklyn on Tuesday night with the winner advancing to the first round.

Cleveland went 1-3 against Brooklyn this season, but the Cavs led the Nets in the fourth quarter on Friday night before collapsing in crunch time.

"I like our chances when it comes down to a dog fight," Love said. "That's what it's going to be come Tuesday night."

The Bucks whittled a 40-point deficit to 12 in the fourth against Cleveland's reserves before Bickerstaff re-inserted Mobley, Darius Garland and Lauri Markkanen and the Cavs regained control.

With a top-three seed already secured, the Bucks rested Antetokounmpo along with starters Khris Middleton, Brook Lopez and Bobby Portis — a reward for the defending champs having another solid year.

Jrue Holiday started for the Bucks but played just seven seconds. He would earn a bonus by playing, so Holiday took the floor for the jump ball, immediately committed a foul and checked out.

Assuming they get the No. 3 seed (No. 2 Boston plays at Memphis on Sunday night), the Bucks will play No. 6 Chicago in the first round and avoid an early matchup against Brooklyn, which took Milwaukee to seven games in the conference semifinals last season.

The Cavaliers, who have maneuvered around injuries all season, are still without All-Star center Jarrett Allen. He hasn't played since breaking a finger on March 5, but might be ready for the postseason.

While the Cavs have loftier goals, Bickerstaff wanted his players to appreciate making the play-tournament.

"These opportunities, and this is what I want our guys to understand, they’re not promised, they’re not guaranteed," he said. "We have guys on this team that it took them six or seven years to get to the playoffs. Me, personally, it was my ninth season before I had an opportunity to compete in a playoff, so this is noting that just because you are around the league, it’s guaranteed."