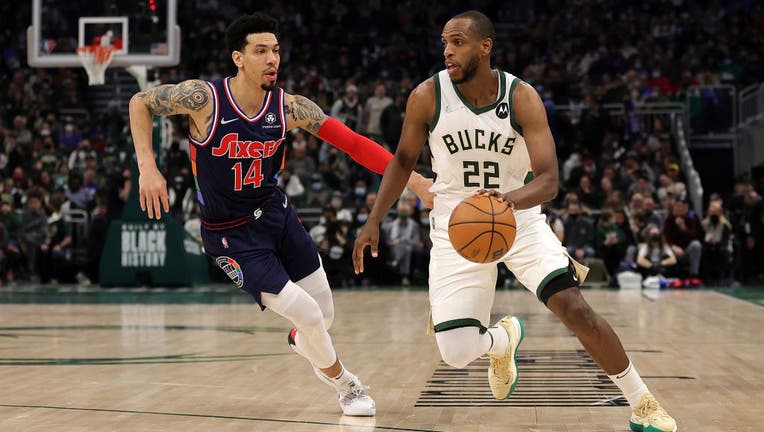 MILWAUKEE, WISCONSIN - FEBRUARY 17: Khris Middleton #22 of the Milwaukee Bucks drives around Danny Green #14 of the Philadelphia 76ers during the first half of a game at Fiserv Forum on February 17, 2022 in Milwaukee, Wisconsin. NOTE TO USER: User ex

MILWAUKEE - Joel Embiid had 42 points, 14 rebounds and five assists and the Philadelphia 76ers regrouped after squandering a 15-point lead to beat the Milwaukee Bucks 123-120 on Thursday night.

Giannis Antetokounmpo had 32 points, 11 rebounds and nine assists for the Bucks.

Philadelphia played without James Harden, who hasn’t made his 76ers debut since coming over in a trade with the Brooklyn Nets last week. The 10-time All-Star and 2018 MVP hasn’t played since Feb. 2 due to an injured left hamstring.

After trailing by 15 early in the third quarter, the Bucks clawed back and took their first lead since the second period on Jrue Holiday’s 3-pointer with 5:47 left. Antetokounmpo’s 3-pointer extended the advantage to 116-112 with 3:56 remaining.

But the 76ers scored the next eight points to pull back ahead for good in the final game for both teams before the All-Star break.

The Bucks had one final chance after Philadelphia’s Furkan Korkmaz lost the ball out of bounds with 2.3 seconds left. After Embiid fouled Antetokounmpo to force one more inbounds pass with 1.1 seconds left, Middleton missed a desperation 3-point attempt at the buzzer.

Tyrese Maxey and Tobias Harris scored 19 points each for the 76ers. Maxey had 12 straight points during a 28-8 76ers spurt that ended the second quarter and enabled Philadelphia to erase a 12-point deficit.

Georges Niang added 18 points and Korkmaz had 13 for Philadelphia. Holiday scored 24 points for the Bucks, Middleton had 19, Jordan Nwora 18 and Bobby Portis 17.

The 76ers snapped a six-game skid in this series. That included a 118-109 decision at Philadelphia on Nov. 9. Embiid, Harris, Matisse Thybulle and Isaiah Joe didn’t play for the 76ers in that Nov. 9 matchup due to the NBA’s health and safety protocols.

A ceremony for the Milwaukee Police Department's most recent graduating recruit class was held Thursday, Feb. 17.