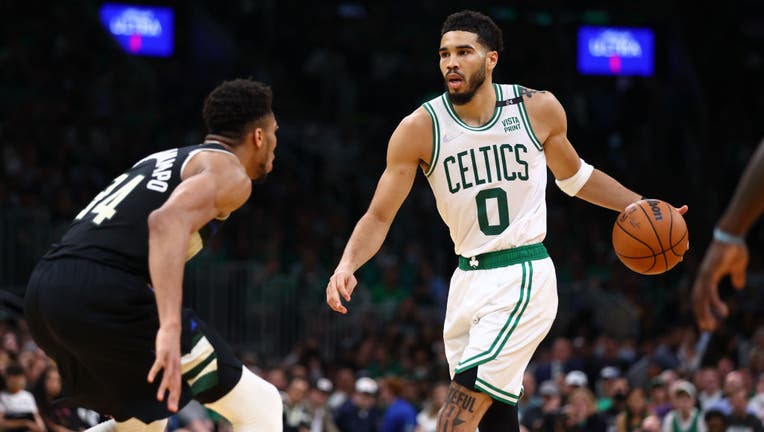 BOSTON, MASSACHUSETTS - MAY 15: Jayson Tatum #0 of the Boston Celtics dribbles against Giannis Antetokounmpo #34 of the Milwaukee Bucks during the second quarter in Game Seven of the 2022 NBA Playoffs Eastern Conference Semifinals at TD Garden on May

Boston will face top-seeded Miami beginning Tuesday in a rematch of the 2020 East finals. The Heat beat the Celtics in six games in that series at Walt Disney World.

The Celtics trailed early but outscored the Bucks 61- 38 in the second half to cruise to the victory. Boston used a whopping 54-point advantage from behind the arc to improve to 25-9 in decisive seventh games.

Giannis Antetokounmpo had 25 points, 20 rebounds and nine assists. But he was just 3 of 11 in the paint in the second half, including 1 for 6 the fourth quarter. Jrue Holiday added 21 points and eight assists. Brook Lopez finished with 15 points and 10 rebounds.

Williams finished 7 for 18 behind the arc as the Celtics finished the comeback after dropping Game 5 at home to fall into a 3-2 hole.

It was 63-53 when Tatum went to the bench after being whistled for his fourth foul. But the Celtics rallied without him, outscoring the Bucks 16-11 the rest of the quarter to take a 79-64 lead to the fourth.

The Bucks led the entire first quarter as Antetokounmpo scored or assisted on 24 of Milwaukee’s 26 first-quarter points.

He ended the period with 10 points, eight rebounds and six assists to help the Bucks grab a 26-20 lead.

Boston began to claw back in the second quarter, drawing a third foul on Bobby Portis at the 8:49 mark. TV cameras showed him tossing his goggles as he went to the bench area. He’d been wearing the goggles since suffering a right eye abrasion in Game 2 of Milwaukee’s first-round series against the Bulls.

With Portis on the bench, the Celtics took their first lead of the game on a dunk by Al Horford that punctuated a 12-2 run.

Boston led 45-43 in the final minute of the half when Tatum was called for an offensive foul on Grayson Allen – Tatum’s third foul of the game.

Following an unsuccessful challenge by Celtics coach Ime Udoka, the teams exchanged misses. But after Smart's steal near midcourt, Antetokounmpo fouled Smart as he attempted a last-second, 3-point heave.

Smart connected on each of his three free throws to give Boston the 48-43 halftime lead.

Celtics center Robert Williams III was available to play after missing three straight games with soreness and a bone bruise in his surgically repaired left knee. But he didn’t play.