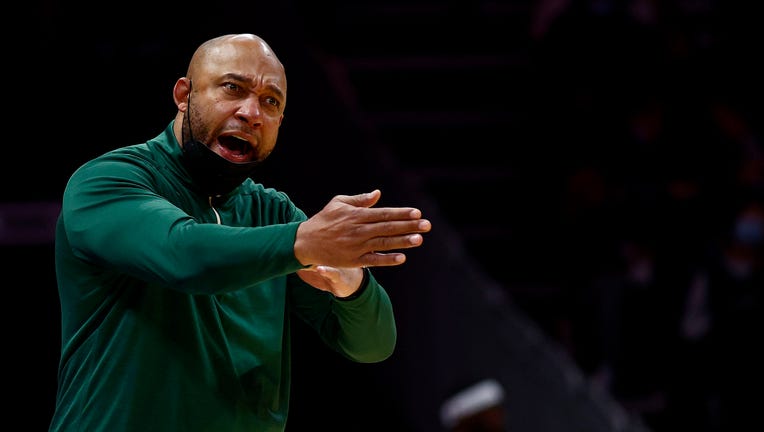 Acting head coach Darvin Ham of the Milwaukee Bucks reacts during a game against the Charlotte Hornets on Jan. 08, 2022 in Charlotte. (Photo by Jared C. Tilton/Getty Images)

LOS ANGELES - A person with knowledge of the decision says Darvin Ham has accepted an offer to be the next head coach of the Los Angeles Lakers.

The person spoke with The Associated Press on Friday on condition of anonymity because the deal has not been publicly announced.

The 48-year-old Ham is getting his first head coaching job as the 28th coach in Lakers history. He has been an assistant to Mike Budenholzer with the Milwaukee Bucks since 2018, and he played a role in their run to the 2021 NBA title.

Ham will be the successor to Frank Vogel, who was fired one day after the Lakers wrapped up one of the most disappointing seasons in NBA history by going 33-49 and missing the playoffs.

The Lakers flopped despite another impressive season from James, who welcomed his new head coach on social media even before the move was publicly announced.

Ham was an assistant with Kobe Bryant's Lakers from 2011-13 on the staffs of head coaches Mike Brown and Mike D’Antoni. Ham then had a five-year stint on the Atlanta Hawks’ staff.

Vogel led the Lakers to the franchise’s 17th title exactly 18 months before his firing, but he failed to coax a winning season out of a veteran-laden roster led by LeBron James, oft-injured Anthony Davis and newcomer Russell Westbrook, who had a dismal first season with his hometown team.

Ham played parts of nine seasons in the NBA and won a championship with the Detroit Pistons in 2004 before moving into coaching in 2008. The Michigan native played collegiately at Texas Tech.