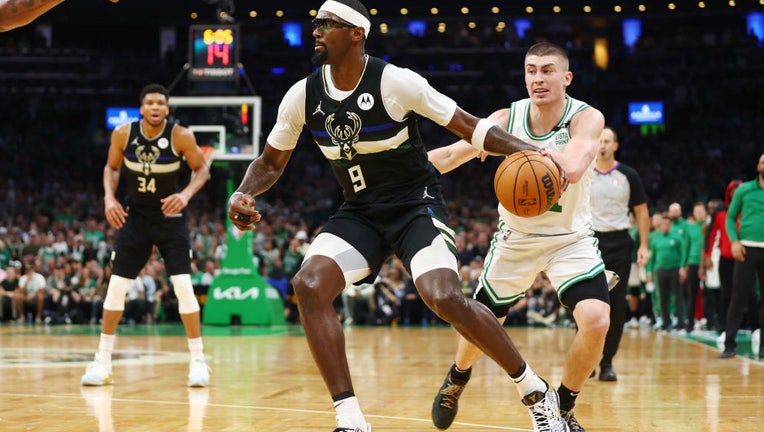 Bobby Portis of the Milwaukee Bucks dribbles against the Boston Celtics during the 2022 NBA Playoffs Eastern Conference Semifinals at TD Garden on May 15, 2022. (Photo by Adam Glanzman/Getty Images)

Last season, his second season with the Bucks, Portis appeared in 72 games, making a career-high 59 starts, and shot 47.9% from the field, 39.3% from three and 75.2% from the free-throw line. He also tallied a career-high 24 double-doubles while reaching double-figures in scoring 57 times, including a career-best 15 games with 20+ points.

Portis has seen action in 32 playoff games with Milwaukee over the past two seasons, including 12 games last postseason where he averaged a double-double with 10.6 points and 10.0 rebounds per game.

"Bobby is a valuable member of our organization and a crucial part of our success," said General Manager Jon Horst. "He is an elite three-point shooter, can score from all areas of the floor and makes an impact with his defense, rebounding, energy and effort. Bobby has embraced Bucks fans and they’ve embraced him back, and we’re excited to have him return to Milwaukee."

Matthews played in 49 games (14 starts) with the Bucks last season after signing with the team on Dec. 3. He also started all 12 of Milwaukee’s playoff games last season.

"We love the toughness, defensive versatility, shooting and leadership that Wesley brings to our team," said Horst. "We’re excited to keep him in Milwaukee."

The 2021-22 season was Matthews’ second in Milwaukee after he previously appeared in 67 games (all starts) with the Bucks during the 2019-20 season.

Carter appeared in 20 games with the Bucks last season, joining the team on Feb. 24 after being waived by the Brooklyn Nets. He also appeared in 11 playoff games.

"Jevon is a proven defender who will bolster our depth at guard," said Horst. "After joining us last season, he showed his strong defensive play and tenacity, which will be valuable to us again this season. We’re thrilled to have him back with the Bucks."