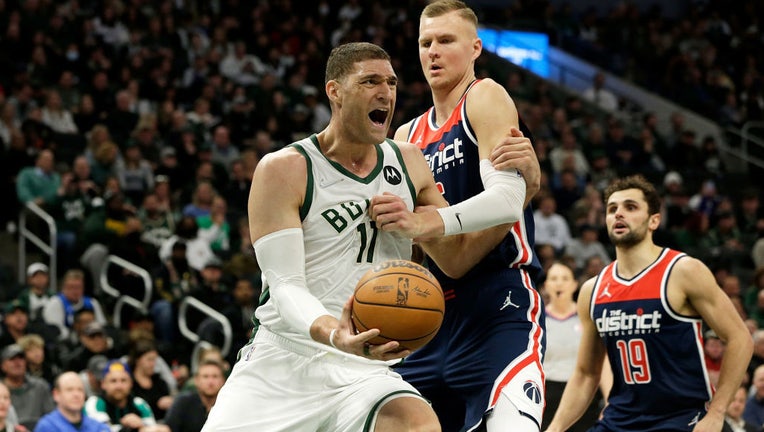 MILWAUKEE, WISCONSIN - MARCH 24: Brook Lopez #11 of the Milwaukee Bucks is fouled driving to the basket during the first half of the game against the Washington Wizards at Fiserv Forum on March 24, 2022 in Milwaukee, Wisconsin. NOTE TO USER: User exp

MILWAUKEE - Jrue Holiday had 24 points and 10 assists to help the short-handed Milwaukee Bucks withstand a late comeback attempt and beat the Washington Wizards 114-102 on Thursday night.

Grayson Allen added 21 points and the Bucks never trailed despite playing without either of their two All-Stars: Khris Middleton and two-time MVP Giannis Antetokounmpo. Middleton missed a second straight game with a sore left wrist. Antetokounmpo was out for the second time in three games with a sore right knee.

Bucks coach Mike Budenholzer said before the game he expects Middleton to travel with the team to Memphis and that he’s "hopeful" the three-time All-Star will play Saturday against the Grizzlies. Budenholzer was less certain about Antetokounmpo’s status for Saturday.

"I don’t think it’s anything long-term or anything significant, but we’ll see whether (Antetokounmpo) travels tomorrow and make decisions on the game Saturday as we kind of see how he feels and learn more," Budenholzer said.

Washington was missing Kyle Kuzma for a third straight game due to right knee tendinitis. The Wizards also continue to play without three-time All-Star Bradley Beal, who underwent season-ending surgery on his left wrist last month.

Ish Smith scored 17 points and Kentavious Caldwell-Pope and Kristaps Porzingis each added 16 for the Wizards. Pat Connaughton had 16, Brook Lopez 13, Bobby Portis and Serge Ibaka 11 each and George Hill 10 for the Bucks.

Washington has lost eight of nine.

History was made at Fiserv Forum on Thursday as, for the first time, a female public address announcer worked the Milwaukee Bucks' game.