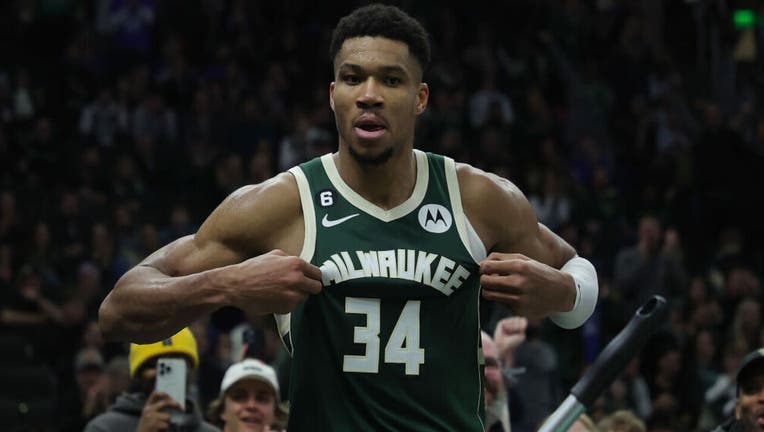 MILWAUKEE - Giannis Antetokounmpo scored a career-high 55 points in a return from a one-game absence and the Milwaukee Bucks beat Washington 123-113 on Tuesday night, snapping the Wizards’ five-game winning streak.

Antetokounmpo has scored at least 40 points in three straight games for the first time in his career. The two-time MVP sat out a 118-95 loss to the Wizards on Sunday because of a sore left knee.

The only other Bucks to score at least 40 points in three straight appearances are Flynn Robinson in February 1969 and Kareem Abdul-Jabbar in February 1972.

Antetokounmpo's previous career high was a 52-point effort against the Philadelphia 76ers on March 17, 2019.

This was Antetokounmpo's second performance with at least 50 points since Game 6 of the 2021 NBA Finals, when his 50-point effort gave the Bucks their first title in half a century. Antetokounmpo also scored 50 in a 128-119 victory over the Indiana Pacers on Feb. 15, 2022.

Washington’s Bradley Beal returned after missing three games with a sore left hamstring, but he played just 13 minutes. Beal scored eight points before the hamstring issue prevented him from playing at all in the second half.

Brook Lopez added 21 points and 12 rebounds for the Bucks, and Bobby Portis had 17 points and 13 rebounds.

Antetokounmpo had nine points during a 17-0 run that began late in the second quarter as the Bucks won for just the second time in their last seven games. They got blown out by the Wizards on Sunday while playing without Antetokounmpo, Jrue Holiday and Khris Middleton.

Holiday played Tuesday after sitting out three games with a non-COVID illness and scored six points in 19 minutes. Middleton missed an eighth straight game with a sore right knee and also won’t play Wednesday at Toronto.

Milwaukee’s 17-0 spurt turned a 49-46 deficit into a 63-49 lead. Washington clawed back and Milwaukee’s advantage to 95-93 on a pair of Daniel Gafford free throws with 10:04 left, but the Wizards never could tie or go back ahead.